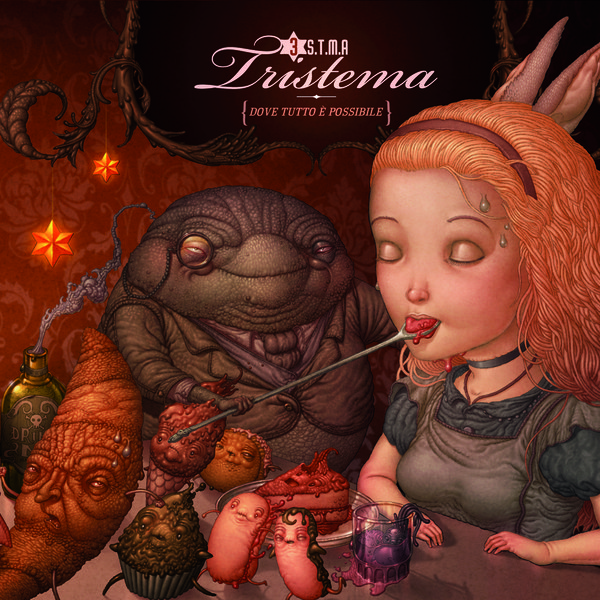 Italian band TRISTEMA was formed back in 2005, and released their debut album “Come ti vorrei” two years later, apparently with quite a few positive reviews following that event. From 2008 and onwards they have started to make a name for themselves, appearing and doing pretty well in various contests as well as being given the opening slot for a fair few concerts supporting artists more well known nationally and internationally. “Dove Tutto è Possibile” is their second full length production, and was self released in the fall of 2012.

One of the qualities in any band that I find extremely important in terms of being able to enjoy their material is the vocalist. I’m not the kind of person that needs to hear a singer with a strong range or a particular style of delivery, but he or she needs to be in tune with the main melody and opting for a harmonic based rather than emotional based delivery. And Tristema has such a singer indeed. He’s got a pretty good range as far as I can tell, which is a bonus for me personally, but the important parts are there in purebred manner: Always in perfect tune and pitch with the melody, always with the perfect choice for when and how to utilize a more intense delivery, always opting for the best possible use of his voice as far as I can tell. The kind of singer whose contributions in themselves is able to lift and elevate a musical experience. The digital promo material sent to me doesn’t clearly state which of it’s members that is the principal vocalist or of that role is shared between the two who is credited with vocals, but if it’s one or both: The lead vocals are brilliant. You have my applauds, for what that may be worth.

As for the music itself, this band is something of a revelation for me also in this department. Short, catchy tunes of the kind that begs for radio play, tight, energetic and generally uplifting in nature. But made with that sly touch of sophistication that makes a progressive rock reviewer like myself really take notice of what’s going on. These guys are fond of blending subtly contrasting passages, gentle verse parts followed by harder edged intermissions or chorus passages. The latter by and large always of the singalong variety, sporting compact, melodic riff constructions of the kind that will get this band a fair few descriptions containing the words indie and alternative I guess. But there’s a bit more going on here too.

Liberal use of careful electronic effects for instance. Frail piano motifs adding a distinct and unique identity when used. One of the songs adds in a recurring hip hop section as well, and manage to do so with a fair degree of success. An ongoing feature in just about all of the songs are symphonic inspired keyboard textures as an additional feature, often sparingly used admittedly but a more or less constant presence. One of those details that is pure ear candy for the avid listener.

Needless to say that I really enjoyed this album at this point I guess. Heck, even the acoustic guitar ballad is given a nice workout here, final piece L’istante one of those songs that really reaps the benefits of the aforementioned highest quality lead vocals. Much the same with another acoustic based effort earlier on called L’eclissi. This one developing into quite the monster track as the acoustic  guitar brings forth Flamenco tendencies, a female lead vocalist adds some additional intriguing details to the proceedings and then the accordion comes along, eventually resulting in a song with a slight touch of early Les Negresses Vertes.

The  purebred rock compositions remain the most impressive ones though, and for me personally the piece I’d like to highlight is Constanze. With a haunting symphonic backbone as the key feature, supplemented by vocals alone alternating with a nifty rhythms and driving guitar riffs dominated theme, the latter occasionally flavored with some intriguing electronic details to boot. An impressive piece of true musical and atmospheric magic to my ears and my mind.

If you enjoy high quality, catchy rock music made with passion, flair and a fair bit of sophistication I can heartily recommend the latest album by this Italian quartet, and can only hope they get the attention they deserve for such a stunning production.