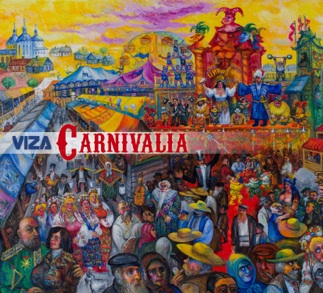 US band VIZA have been around for quite a few years at this point. They were formed all the way back in 2000, but didn’t release their first album proper until “Maktdub” in 2006. “Carnivalia” is their fourth album, if I have read their discography correctly, and was released through Architects of Melody and Graviton Music Services in 2011.

This is one of those albums where I just don’t know where to begin. Twelve tracks spread over 36 minutes, yet with so much to describe and without the ability to find the words to do so. If you, like me, are unfamiliar with this band then this is a production that will leave you bewildered. This is weird music, sometimes downright eerie and creepy, but with a charm that quickly will win many over. At least if you have a liberal taste in music.

This is a band that do know their gypsy music. I wouldn’t be all that surprised if they know their klezmer by heart either. They have a firm grasp over Mediterranean folk music in general and the Greek variety of it in particular, and they aren’t strangers to Eastern European folk music either. From what I can hear it does seem that Middle Eastern and Arabian folk music is another territory they are fairly well versed in. They are equally familiar with the pastoral English landscapes, and by George they do know their pub chants from that region as well. Indeed, while not that prominent on this album I kind of get the impression that this is a band rather fond of the public houses of old, truth be told.

The thing isn’t that Viza mix and blend and toss all these elements around in a haphazard manner. Or, to be precise, they actually do toss all these elements around in a haphazard and carefree manner, but that aspect of this album isn’t what makes it hard to describe. It’s the additional details that combines into a creation with so many dimensions that time and space occasionally warps. Like country and western music details. Or accented vocals where the accent is emphasized and played around with. Or themes that can’t really decide whether they are going to stick to the Greek plucked guitar vibe hone n closer to the spaghetti western soundtrack mood. Stuff like that. Add in some electric guitars to the mix as well, with both soloing and riffing done in typical rock manner as well as with varying degrees of folk tinged characteristics and then toss in some aggressive alternative rock and punk elements into the brew just for the sake of it, and then you might have a feeling about what Viza presents us on “Carnivalia”. If you have a sturdy imagination that is, and one similarly aligned as the members of Viza.

From what I understand System of a Down front man Serj Tankian has taken this band under his wing, and those familiar with his solo material and his band’s output may have a slightly better idea about Viza’s forays into the world of folk and world music inspired alternative rock and alternative rock flavored folk and world music. “Carnivalia” comes recommended to those, alongside those with a soft spot for world music inspired material that doesn’t take itself all that seriously and with a liberal taste for musical variety and just what constitutes good humor.