My Silent Wake: Invitation to Imperfection (2017) 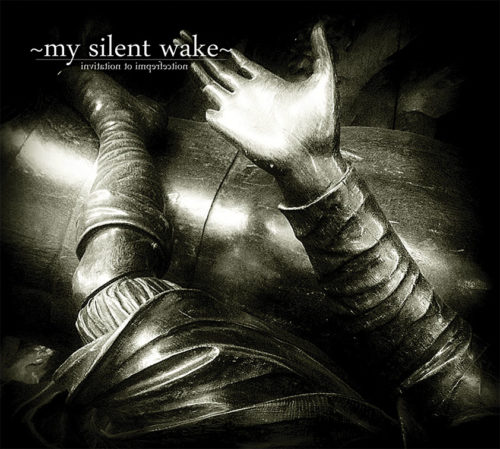 UK band MY SILENT WAKE first appeared back in 2005, and have been an active live and recording band for the most part ever since, although I get the impression that they have toned down their activities as a live band in the last few years. They are mainly known as a doom metal band, but also have some productions of a markedly different and experimental nature to their name. “Invitation to Imperfection” is among the latter type of albums, and was released through German label Opa Loka Records in March 2017.

“Elves are wonderful. They provoke wonder.
Elves are marvelous. They cause marvels.
Elves are fantastic. They create fantasies.
Elves are glamorous. They project glamour.
Elves are enchanting. They weave enchantment.
Elves are terrific. They beget terror.”
– Terry Pratchett

This quote from the late Terry Pratchett was one that frequently came to mind when I listened to the material on this album. Not because I suspect elves as such have been on the mind of the creators of this music, but due to the pagan, primal and unnerving character much of the music here has, while at the same time being striking and often beautiful. Medieval folk music is a clear inspiration it would appear, and then arguably of the kind enjoyed by people that know that Woden, Wotan and Odin are one and the same rather than the kind listened to by those active in environments were witches are forces of everything good and great, so to speak. Old pagan rather than new pagan if you like.

Plucked string instruments of various kinds and drones by way of accordion and violin are key elements on many tracks, with room for some flowing flute soloing here and there too, and the rhythms are by and large of the old percussion rather than modern drums variety as far as I can tell. Some tracks features vocals of a lo-fi character, the lo-fi aspect one I suspect is a studio crafted effect to enhance an Earthen, ancient feel to the music rather than a basic recording though.

This isn’t a romantic folk music oriented production however. Those who treasure music of this kind to dance and drink to can look elsewhere, as this isn’t an album that inspires anything going jolly or, indeed, golly. This is dark, solemn and serene music, more often than not with an unnerving touch. Dark fluctuating undercurrents of sound, mournful moods and atmospheres, unsettling tribal sounds and mystic shamanistic vibes is the order of the day here, alongside introspective musings and occasional forays into realms with perhaps a bit more of a haunted character to them as well. Ghostly whispered vocal effects are used extensively throughout, kind of emphasizing these aspects a bit by their mere presence. There’s also room for a creation of a more distinctly otherworldly nature however: The fluctuating sounds on the song Nebula is one that will please just about anyone that finds the description cosmic ambient to be of general interest.

Amidst the more or less dark and unsettling and mournful creations there’s also a massive experimental creation of an ambient nature present: The concluding mammoth composition Melodien der Waldgeister, which I guess might have been called the music of the forest spirits in English. In terms of structure a creation that follows in the footpaths of works such as Mussorgsky’s Pictures at an Exhibition, where the overlaying theme is someone walking between different tableaus, with different music coming from each scene visited. In this case with sounds of walking and breathing replacing the recurring theme of Mussorgsky’s composition, the music from the different tableau’s of a more sketchy nature and, possibly, with an underlying story of a darker overall nature. My impression is that we’re following a man walking into the woods who never manage to get out again, the kind of story that may have  inspired good, old J. R. R. Tolkien when he wrote the section about the Dwarves traveling through Mirkwood. Or possibly that very storyline may have been an inspiration when this more than 20 minutes long ambient epic was crafted.

For me the album title indicates something about the nature of this album: It is not a perfect album, and to be able to enjoy all of it you will need to have a rather expansive general taste in music that includes folk, ambient music and cinematic excursions, possibly also neo-folk. A certain affection for the old and original pagan philosophies, stories and landscapes probably wouldn’t hurt either, but more important is a taste for music of these kinds to be mournful, dark and more or less subtly unnerving. Those who find such descriptions alluring will most likely find this album to be well worth spending quite a bit of time with.