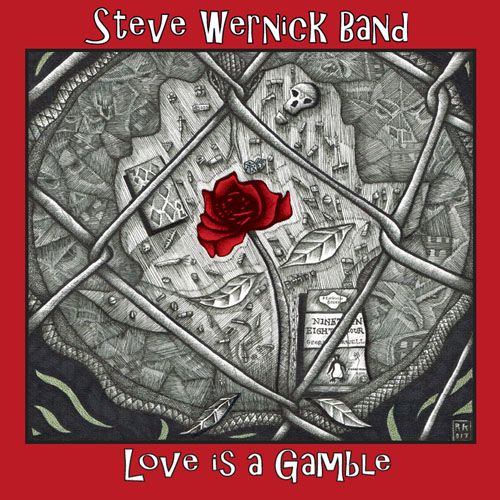 Australian STEVE WERNICK BAND is lead by Englishman Wernick and his main partner in music Rolfe Knudsen, the two of them continuing a cooperation that started in their previous bands The Twisted Waltons and Cleanskins. Following an initial mini-album, “Love Is a Gamble” is the proper full length debut by this band, which was released in the spring of 2017 through RPM Records.

While based in Australia and the band being the main creative vehicle of a Briton, the music explored on this album is one with it’s core and foundation on a different continent altogether. Roots music is the name of the game here, with good, old fashioned country music the common denominator throughout.

That being said, this isn’t one of those albums that has the spirit of Nashville written all over it. The music does sound like something that might and perhaps even should have been recorded by a US band, but Wernick and his comrades in music tends to avoid hitting the part of that music scene which is most overly exploited, a few exceptions aside. Yes we do get lap steel and some slide guitar here and there, and there is indeed a fiddle doing the rounds on several occasions as well, but the slow, mournful serenades of a cowboy mourning the demise of his trusted cow or car or melodramatic self sorry tales about unfaithful wives and girlfriends are by and large avoided lyrically as well as musically. While lyrics isn’t what I focus on when listening to music, my impression is that Wernick is an observer of life on rather more important topics, and the music he makes by and large reflects that scope as well.

We have songs exploring darker toned and even ghostly sounding atmospheres, cue Kill Your Own Snakes as a good example of that, this particular cut being my clear favorite on this production. We are treated with toned down, sparsely arranged affairs with some distinct nods towards old folk music, at times arguably with the folk music as the foundation and the country elements as embellishments to that. A few cuts had, in my ears at least, a slight and ever so subtle jazz-tinged feel to them as well, although that may well be an accidental feature. The more tight and harder edged cuts with a stronger country rock feel to them aren’t though, and a few of those tiptoe towards the borders of mainstream pop/rock as well. So while this album by and large is a country music album, at least to my ears, it is a rather expansive one at that, and one that avoid the most common cliches at that. The slightly talk-like vocals of Wernick and at least in some of the cuts here what appears to be a lo-fi, honest kind of mix and production may limit interest from stereophiles a bit, but then again I really wouldn’t think that crowd of music fans to be a key audience for this band in the first place.

If you tend to enjoy music described as roots or country music, and your main taste in that department is towards artists that shies away from the most commonly explored aspects of those musical playgrounds, this band from down under may well be worth a check. In particular if you tend to enjoy productions that explore a more expansive set of material as far as detailed style and general approach in this landscape is concerned.

Track list:
Love Is a Gamble, Keep on Wearing Black, Kill Your Own Snakes, The Road Is My Home, Blackjack’s Blood, Pathway to Hell, Graveyard Blues, Wrong Time Wrong Place, Soul of This Dying Town, War for Peace, Black Dog Blues, A Place I Call Home