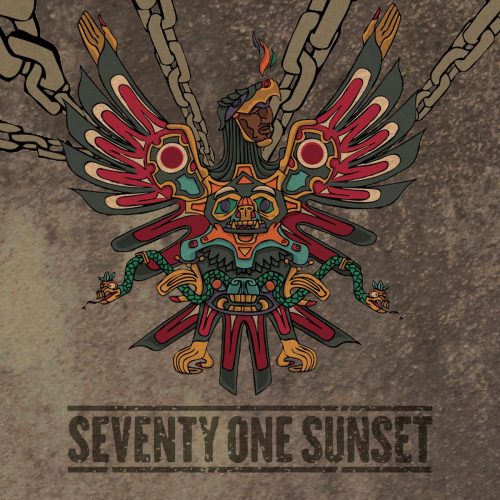 New Zealand band SEVENTY ONE SUNSET first appeared as recording artists back in 2014 when they released their initial EP “Mule”. Towards the end of 2015 they took the next step on in that department and released their full length debut album “Bitter Earth”. Like with their EP, this production was released through kiwi label Allgood Absolute Alternative Records.

Describing music is pretty comparable to the art of tasting colours, a description I’ve used numerous times. One can approach this subject by describing music from a technical point of view, from a genre point of view, with comparisons towards other artists or by reflecting on the emotional impact the music has on you. But whether you choose one or another, combine aspects of each or start from a completely different point of view, just about everything will boil down to a personal and subjective taste in music in the end.

Some artists are more challenging than other to write about. Not always because the music is challenging, but rather that they mix and blend elements you haven’t encountered all that often before, leaving you with a lesser choice of options in how to approach them. And Seventy One Sunset is indeed such a band.

They do fall within the alternative rock universe somewhere, at least as far as I’m concerned. They way they go about it and end up there is perhaps a bit more challenging to go about, and one that for me comes down to gut feelings and subjective impressions rather than stated facts as such.

One of the key associations I get from this album is that this is a band that know their garage rock. There’s a vintage vibe present, perhaps more as an undercurrent than anything else, which makes me think of the bands of the late 60’s and early 70’s described as rock and hard rock, flavored with the psychedelic details that for me is a key aspect of garage rock. Hence why I regard this as something of a subtle red thread throughout.

We’re also presented with the occasional lapse into what many would describe as more of an indie rock landscape though, in it’s most gentle phase of a kind and nature that makes me think of REM and early 90’s Manic Street Preachers. Again as more of an undercurrent really a subtle presence only stated more clearly on a select very few occasions.

That being said, there are also some clear cut grunge excursions on this album, one of which contains some distinct nods in the direction of Nirvana, be it by accident or design. Other cuts have more of a retro stoner rock feel to them, of the kind that makes me think of the armies of retro hard rock and stoner bands that has been coming out of Sweden for the last decade or thereabouts.

These aspects are then tossed into a whole and given a light seasoning of punk and possibly post-punk as well, creating music that in sum is, well, alternative. The cuts tends to be tight and firm, more gravelly sounding than the reality actually is in places, as the overall impression of this CD is that it has been well made, well mixed and given a nice and tidy contemporary production.

What I do not get all too often are songs that stick, that make an impression, that finds me humming along. I rather suspect that some of this will be due to the intensity of the live concert not being captured in the recording studio, while other aspects of this will be due to personal taste more than anything else.

A fine album, and one that merits a check by those who tends to be fascinated by a slightly eclectic and psychedelic flavored variety of alternative rock, but ultimately also a production with more of a niche appeal as I regard it. Not the album that could break this band, but possibly one that gave them a better standing among a smaller niche audience.