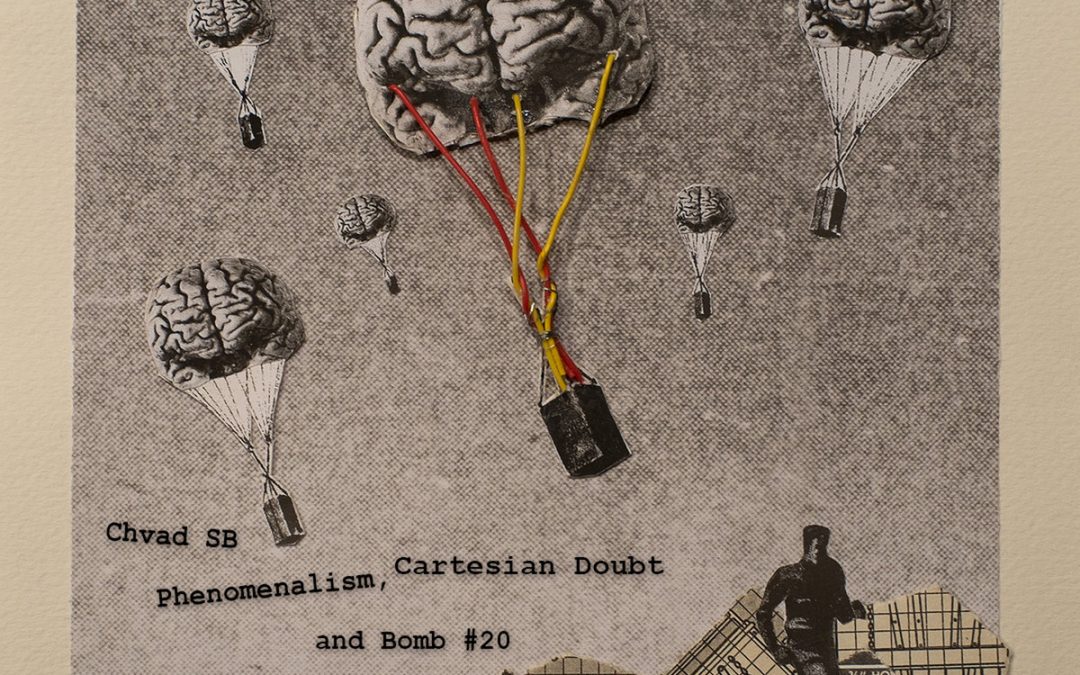 US composer and musician CHVAD SB has been active for around a quarter of a century at this point, perhaps primarily best known as a band member in a number of different set-ups, but he also has a few solo productions to his name. The curiously named “Phenomenalism, Cartesian Doubt and Bomb #20” dates back to 2016, and was released through US label Silber Records.

The back story to the creation of this album is Chvad’s stated admiration of the earliest electronic movie scores, dating back to the 1950’s. Furthermore, this isn’t material that has been composed or otherwise created in a normal manner, but rather music made by way of a programmed, self-playing modular synthesizer using feedback loops. The main work, as such, was apparently to fine-tune the programming. A task that took a few good months, then in addition to setting up this equipment in the first place I’d suspect.

While I understand that the system was programmed to create music that never repeated itself, there is a degree of repetition to this material. There are similar patterns and minor variations throughout, and the material does come across as rather repetitive. That in addition to being somewhat challenging, at least when these landscapes are given a grand tour that clocks in at more than 70 minutes.

Initially this album does give me associations towards some of the more expressive material of a pioneer like Isao Tomita, and I’d hazard a guess that he was originally inspired by many of the same sources as Chvad SB has. As such, certain similarities here are to be expected. But while Tomita often and perhaps primarily explored previously made classical music by way of electronics, this is an album that hones in on improvisation and free form material, given the parameters programmed in to the modular synthesizer. Hence the end result here is material that reside somewhere in between the landscapes of experimental electronic music and what is often described as contemporary classical music. Aspects of the latter are present, by accident or design, but the style and expression are probably much closer to the former.

The end result is undeniably experimental. Minimalist music perhaps, a demanding and challenging affair with cold alien sounds and a liberal amount of atonal and differently tonal textures, complete with noise details and unusual fluctuations and patterns. Somewhat repetitive in overall nature, as despite the programming of non-repetition there are minor variations that will have a markedly similar overall sound to them. People that find the descriptions experimental electronic music and contemporary classical music to be alluring to an equal degree would be my first choice as far as a specific audience for this album are concerned.