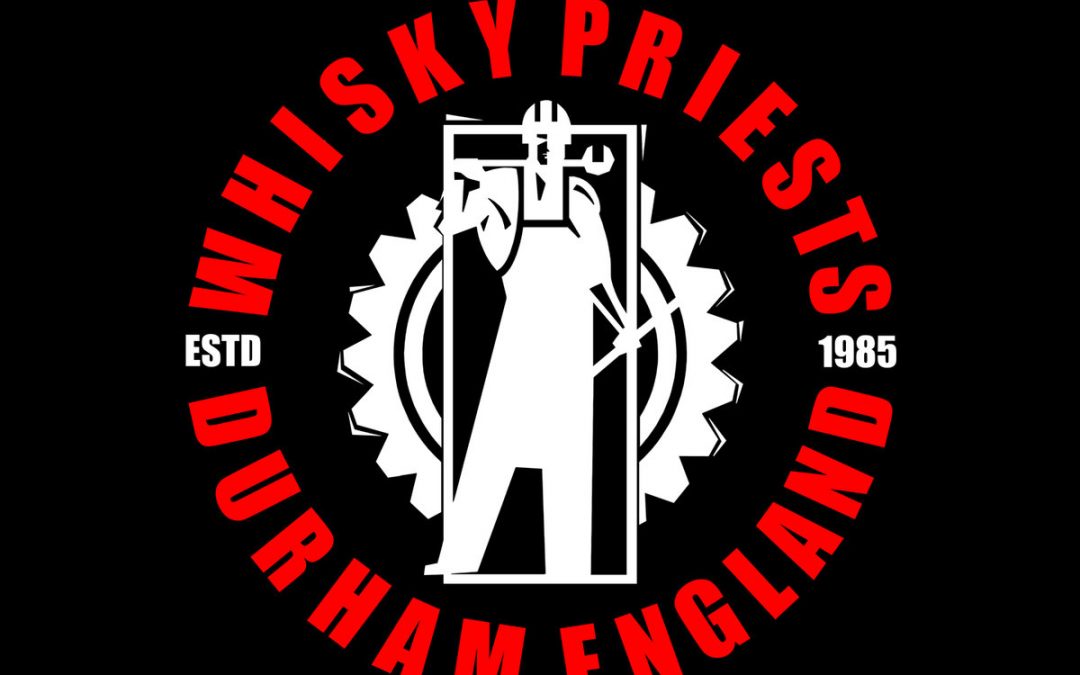 I’ve just been to the band’s Bandcamp page, https://whiskypriests.bandcamp.com/, and I am in total shock, as this is currently for sale for just £19.99!! That’s not for the digital download (although that is included), but all 12 CDs in a cardboard slip sleeve and a t-shirt! Literally. Perhaps I ought to backtrack a little – for those who have been following my scribblings over the last 30 years or so then The Whisky Priests will not be a new name to you, but for the rest of you perhaps a little background would be in order. The Whisky Priests were/are based around singer/songwriter Gary Miller and his twin brother Glenn (accordion), along with other musicians (rightly or wrongly I have always felt that bassist Mick Tyas was the other key member of the band). They are proud sons of Durham and produced a form of folk rock which I have never come across anywhere else. Often more folk than rock, here was a band who had nothing to do with much of the ‘tradition’, but instead were singing about working class issues and particularly life down, or connected with, the collieries.

This collection covers the years 1985 to 2000, with the 12 discs covering 11 albums (‘Bloody Well Live!’ is here as the extended two-disc edition). I only managed to see them live myself once but was blown away by what I experienced that night and it is still etched into my brain. The gig was at the (in)famous Camden Monarch, which had a justified reputation for having great bands, but I never expected to see a group dressed as if they were from another time, with collarless shirts, flat caps and braces, attacking their instruments as if their very lives depended on it. At the time I called Glenn Miller the Jimi Hendrix of the accordion, and I meant it: he was playing the instrument like a dervish, and it probably was no surprise that at one point he literally broke it. This meant him kneeling on the stage with screwdrivers taking it to pieces to fix the unruly instrument while the chaos continued above his head. I met the Miller twins after that gig, and they were so pleased that I wanted to write about them that they pressed CDS into my hands and we promised to keep in touch.

That has continued for well in excess of twenty years, as I wrote about each release as it came out, falling in love with each and every one of them. Gary has an unusual vocal style, singing in a fashion which is definitely marmite, you either love it or hate it and is quite hard to describe so I won’t, just listen to it. There are times when it is just him and an acoustic guitar, others when it is him and Glenn, and yet others when it is the band in full flight – something which always must be taken very seriously indeed. For some reason they never made it much above cult status here in the UK, but in Germany they were major live draws, recording both of their live albums at the Markthalle in Hamburg in front of raving crowds, with ‘Here Come The Ranting Lads’ also being released on video.

So now you lucky people, after way too many years out of the business, The Whisky Priests are back. There has been a tour to promote this release, which in itself is nothing short of amazing. There are 187 songs on here, more than 12 hours of music, yet it is being virtually given away. That there are only 300 sets available and it has yet to sell out is both a miracle and a sad indictment on the music scene in the UK. Okay, so each disc is in a cardboard sleeve with details on the back (none of the original booklets or lyrics) but the artwork is on the front, along with who played what and where the song came from if it was a revised/expanded edition (which they nearly all are).

Mining folk music, sung from the heart, by guys who were never in it for major success as they knew this was never going to hit the mainstream. Some magazines such as the mighty Rock ‘n’ Reel gave them page space, but sadly it was way too little, and the band just disappeared. Since then there have been little bits and pieces, including the incredibly impressive ‘Mad Martins’ from Gary (honestly, this should be treated as a doctoral thesis as well as a piece of music) which included old WP colleagues such as Glenn and Mick, but the recent tour was the first time they had played together with the old songs for many years. I, for one, have thoroughly enjoyed playing all these albums again, and I did it in the “proper” way, namely just putting one disc after the other, in order. Yes, it took a couple of sittings, but there is a lot of music here. If you can join in the singalong which is “Dol-Li-A” then you have no choice but to get this, and if you can’t then your music education is sadly lacking and you need to get this, as any understanding of modern English folk music cannot be said to be complete without this set. It isn’t sweet, it isn’t innocent, it is rough and covered in coal dust, and no-one can imagine Fairport Convention ever sharing a stage with The Whisky Priests, they are way too sweet and nice for that. Working class music, by working class men, now has to be the best time ever to discover the music of The Whisky Priests. Did I say there is more than twelve hours of music here for just £19.99? Crazy. Do it now.