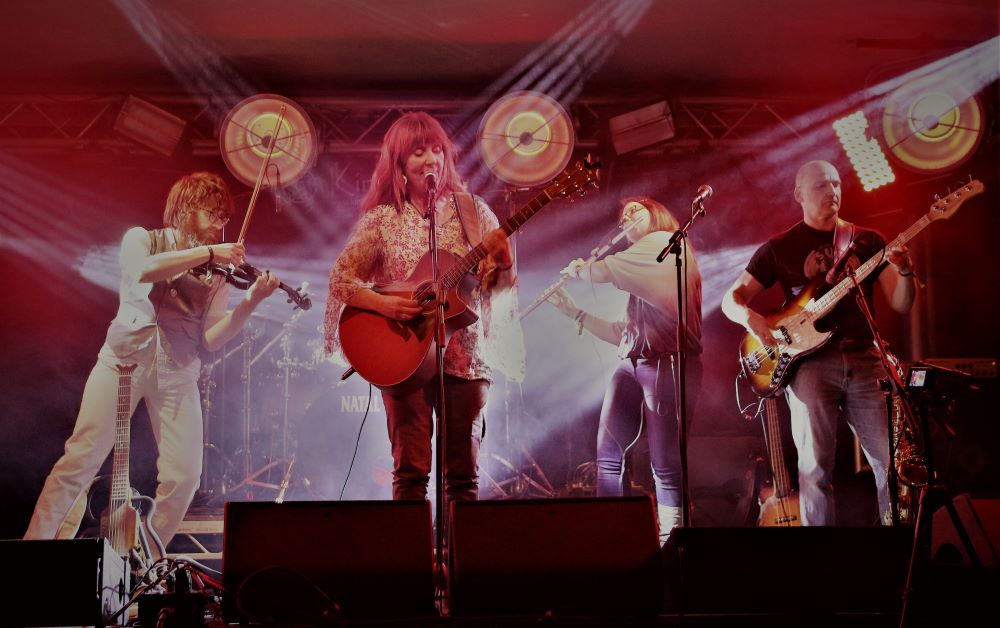 The five-piece, Kindred Spirit Band has a completely original take on the Prog Folk Rock genre, weaving thrilling electric violin and flute / sax with “perceptive and intriguing” song-writing, driving rhythms and “haunting and bewitching” female vocals. Combined with Elaine’s expansive, scientific edged concepts and “perceptive and intriguing” lyrics, their sound has been likened to “Curved Air”, “Fleetwood Mac” and “The Moody Blues”.

Elaine Samuels, the band’s founder and driving force, began performing in folk clubs at the age of only 13, getting a mention in the local press after her first spot in public as “one to watch”!

“Elaine has a voice which can be both hauntingly beautiful & deeply emotional, coupled with a powerful stage presence. Her material ranges from folk through to blues, but it is her rich repertoire of perceptive, intriguing self penned songs combined with her guitar work which sets her apart”.
Rosie Upton, Bath Evening Chronicle

Joining Elaine, the current Kindred Spirit Band line-up features the classically trained Catherine Dimmock, playing flute and saxophone, who also has a most beautiful voice, Martin Ash, also a classically trained violin and viola player, Mike Hislop, playing driving bass guitar and drumming legend, Les Binks (ex Judas Priest) or the prog rock loving Aleem Saleh. Martin Ash, deserves a special mention, since he is not only an exceptional player, being able to play folk and country equally as well as rock riffs through an effects pedal and with a flair for improvisation, but he gets completely immersed in the music and, during wild solos, will launch himself and his wireless electric violin, to their delight, amongst the audience!

The songs on the new album deal with topics including the apocalypse, miracles, overpopulation, alchemy, escaping daemons and Viking invasion! All of these songs have Elaine’s perceptive, skilfull and often intriguing touch!

The first song on the album, No Smoke Without Fire won a song-writing competition in March 2019. The title track, The Alchemyst is being featured on the cover mount CD of the September 2019, issue 102 of the global music magazine, “Prog”. The final, bonus track is a cover of a classic song, which fans have asked them to record, as they have made it their own putting a special slant on it!

Elaine is very concerned by environmental issues and many of her songs deal with this in interesting ways, for example the title track of her album, “Metamorphosis” likens the greed of modern man to an enormous, ravening, caterpillar-like monster rampaging across the earth and consuming everything, including the human beings who get in the way. Some of the humans consumed inside the beast discover other like-minded individuals and cause a metamorphosis of the monster into a healing, spiritual butterfly, which then flies over the earth, healing it!

Elaine has come to realize that it is very difficult for us to change our modern way of life because we are so entwined with the systems we live within. Given calls for change seem to be going unheeded, she feels that encouraging families to consider having a maximum of two children in future should stop the growing problem of global overpopulation. This action could be taken directly by the people themselves, without the requirement of governmental action. So she set about writing a scientifically persuasive song, called Don’t Have More Than Two, which she hopes will help to influence positive change. Local residents of all ages came together to sing on the choruses, during the recording of this song! The song has also been applauded by the group Population Matters.

https://populationmatters.org, whose patron is Richmond resident and national treasure, Sir David Attenborough, who said,
“Slowing population growth is key to saving the planet”

In April 2016, the band were spotted by the wider prog rock world, where they have been embraced, with great reviews of gigs and their most recent album, Phoenix Rising, leading to international album distribution and a feature in the January 2017 edition of Prog Magazine. “Elemental” is set to be released on November 2nd 2019. 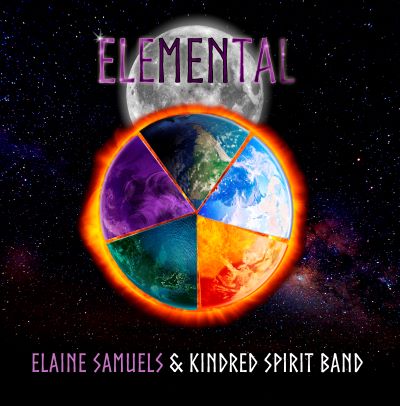