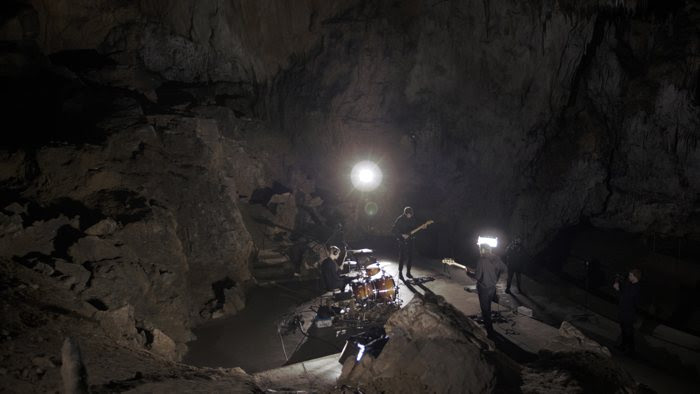 The Post-rock / shoegaze trio Tӧrzs from Budapest, Hungary is out on October 18, 2019 with a new album titled Tükör.

Törzs take their name from Hungarian terminology that connects ideas which reference persistent evolution coupled with a coherence and continued clarity of conceptual vision. This motif assumes direct meaning on their upcoming third record Tükor, which sees them initiate a shift from the inclusion of vocals to an entirely instrumental approach. They retain their strong shoegaze-aligned roots while employing post-rock technique to explore chosen themes via texture, melody and atmospherics.

The new album Tükör was recorded live at Aggteleki Cseppkőbarlang, located within a cave system in a Hungarian national park. The resulting songs ring with crisp clarity and voluminous depth, echoes reverberating radiantly and giving the album a distinct sense of place, a sonic imagery that can be easily conjured by the listener. The album’s title translates to “mirror,” appropriate as the sounds of the individual instrumentation can be heard reflecting boldly off the surfaces surrounding the musicians during their performances. But beyond that this is a record meant to inspire self-reflection, to conjure ideas about how we see ourselves in one another, how our paths through life parallel, and how these related images can become distorted based upon who’s perceiving them and how. It’s a broad idea, and one that’s best served with instrumental music as its backdrop, so each listener is given the opportunity to experience their own version as it unfolds.

Watch the official video for Negyedik at https://www.youtube.com/watch?v=aY2FzG5rZfM

There has been a blossoming trend of post-rock bands recording their material as full units rather than tracking individually, and time and again this process has proven successful. Tükor works because the compositions are strong, but it flourishes because it feels lived in, it exists as a breathing, evolving construction. This is part and parcel with Tӧrzs’ mission statement, to be in a perpetual state of growth and re-definition, to be true to exactly what they are in the moment, and capture that as honestly as possible for listeners.