Operation Paperclip: The Return Of The Stanislaus County Kid (2019) 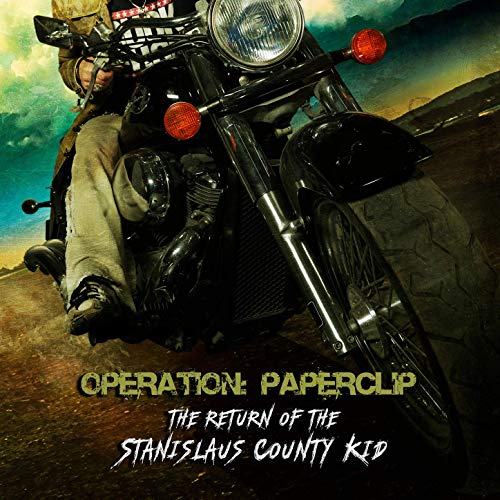 Here we have the debut release by Operation: Paperclip, another project put together by Bob Madsen (he has a few on the go at the moment, check out https://www.thehighlanderco.com for more information) along with keyboard player/singer Tony Carey (although Tony has had a successful solo career as well as the Planet P Project, I always think of him as the keyboard player for classic Rainbow). Here we have a 20-minute rock opera co-written by Bob with Kenny Steel 41Point), based on characters originally created by Tony Carey in his first few solo albums. They also brought in Gregg Bissonette on drums and Frank Rosato on engineering, and it was only after it was all finished that they decided to also add a cover, namely Buffalo Springfield’s “For What It’s Worth”.

Here we have an album which feels firmly rooted in the Seventies, where it didn’t matter what influences one brought into the songs, and with no stick within particular boundaries. It rocks along when it needs to, with twin guitars, sounding a little like The Band, or even The Boss, or it can be reflective with layers of keyboards. It doesn’t sound modern in any way, this is rock music which is honest and feels full of sweat and power, organic and full of passion: it is hard to realise the main players were either side of the Atlantic pulling this together (Carey lives in Germany). Carey’s voice is gravelly, and sounds its age, but that works well in this style of music which needs to be far removed from single note vocal perfection. There is even the use of film clips to add additional depth and elements to the music, while Bob ensures his bass is never too far from the surface.

Apparently this was a childhood dream come true for Madsen, who used to listen to Tony’s albums a great deal when he was younger, and let’s hope they undertake further work for a full album release (this is only 24 minutes long in total), as I for one would like to hear more.