Fabrizio Sciacca Quartet: Gettin’ It There (2019) 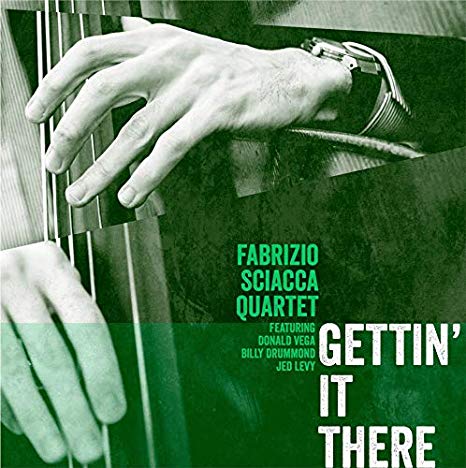 This is the debut album by bassist Fabrizio Sciacca, and he has been joined by Jed Levy on saxophone, Donald Vega on piano and Billy Drummond on drums. Originally born in Italy he has studied at both Berklee College of Music in Boston and the Manhattan School of Music, as well as playing in jazz clubs during that time. With a master’s degree under his belt he has now produced his debut release, and I must confess that the jury is somewhat out on this one. Although this is a quartet, often it is just bass, piano and drums on the seven songs, and while that isn’t an issue it feels much more like a piano-led album that one where the bandleader is the bassist. Consequently, when either Drummond or Sciacca himself take a solo, it just doesn’t really fit in with the rest of the album.

There are sections where this is a delight, and the use of cymbals (particularly during “Lullaby in Central Park”) is nothing short of inspired, yet this in many ways this doesn’t feel like a complete album. At times it swings and bops, but at others it feels too much like jazz just to be heard as background in a club as opposed to being put on to be enjoyed repeatedly at home. Pleasant, but never dramatically exciting, it is still an album I have enjoyed playing but whether I will go back to it again is another matter altogether.