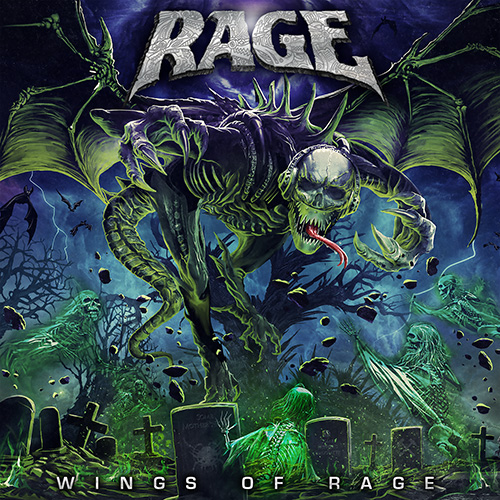 There is no doubt that since I discovered Rage in the Nineties, I have looked forward to each and every release from the band. It does not seem to matter who he has with him, as bassist/singer Peavy Wagner ensures they fit with his vision and each album is full on Rage. Here he is accompanied by Marcos Rodriguez (guitar) and Vassilios “Luckyˮ Maniatopoulos (drums) for their third album together as a unit, but although this album was only released in January it has already been announced that Rodriguez has left the band for personal reasons and Peavy is now contemplating moving the line-up back to a twin guitar attack, the first time since he totally changed the line-up back in 1999.

Peavy has been pushing this band since their formation in spring 1983, and while these days they are far more power metal than thrash, there is also a large amount of commerciality within their sound, and they are certainly one of the most recognisable metal bands around. As one has come to expect, this is a modern sounding album which also looks back over the band’s nearly forty-year career. Fans of earthy thrash tracks with the Rage attitude will be pleased with the likes of “True” and “Wings of Rage” while those more into power metal will “Tomorrow” and “Chasing The Twilight Zone”, there really is something here for everyone. For older fans, there is even an updated take of the 1996 single release “Higher Than The Sky” which originally featured on ‘End Of All Days’, here called “‘HTTS 2.0”.

Given that Wagner is still also working with Refuge (which is the early Nineties line-up of Rage with Manni Schmidt and Chris Efthimiadis) plus Lingua Mortis Orchestra, all of which have been releasing material over the last couple of years, one can only be amazed at how he holds it all together. Yet another incredibly solid and enjoyable release.