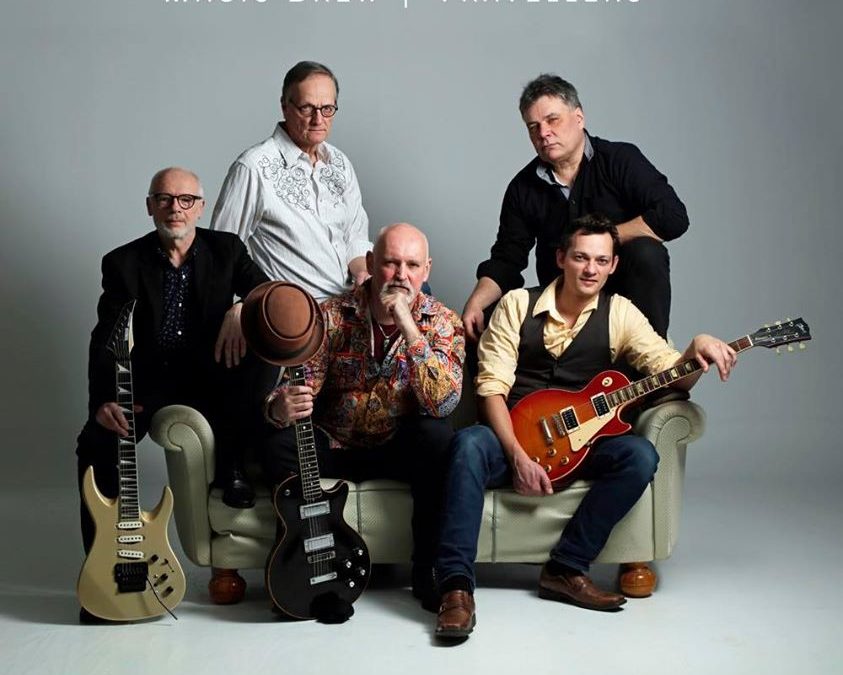 I must admit to having been somewhat confused as to who these guys really were. My first impression was that they were a top named band from the seventies that had reformed undercover! Clearly, judging by the press release photos, they had amongst their crew a certain look of pre-eminence about them. A definite maturity about their presence and a confident ‘no holds barred’ seventies hard rock stylisation to their sound. And yet this album entitled ‘Traveller’s, for review here is their debut album. Fortunately, their guitarist ‘Danny Mollerup Sørensen’, was immediately at hand to provide me with a most excellent detailed ‘Heads Up’. So excellent in fact that I have reproduced all of his fascinating insight it in its entirety below.

If you like powerfully delivered full-on guitar and organ drenched heavy blues-tinged rock with masterful lead vocals, then this album is a must for you, an album you will play over and over again. In lots of respects there is certainly more than a passing resemblance to the heavy metal bands of the early seventies, band such as ‘Deep Purple’ easily come to mind but the  German Kraut Rock band ‘Birth Control’ certainly comes to the fore.

“Magic Brew” are certainly a seriously polished outfit and whilst they deliver well organised and accomplished heavy rock music there is a real air of fun about them which spills over in their output and which can be detected when listening to the album. Clearly these guys would be amazing to see playing live with not only the obvious versatility of performing their own music but also recreating monster rock anthems from the past.

Central to their persona is frontman ‘Peter Castella’ whose uniquely delivered vocal style is totally astounding with a mid to high -range singing register that literally spells out  ‘rock ‘roll ‘through and through’ with his expert phrasing and amazing intonation. Almost like a lost art these days Peter certainly has the knack of projecting the music ever forward as he skilfully increases the level of excitement to fever pitch. In addition to his vocal duties, Peter plays some incredibly neat harp intros and infills spread over the various tracks.

‘Magic Brew’ is without doubt a band that is‘ bringing back to life’ an area of progressive/heavy rock music that otherwise, and seemingly, has faded from the main strata of rock music. But don’t be misled into thinking they are a retro heavy rock band because they are a powerfully tight-knit unit full of consummate musicians. A band capable of turning their hand to many different forms of rock, pop, and progressive music which they amply display on their debut album here. The engine room of the band is a dynamic combination of powerful drumming and melodic driving bass. But with a skilful dual lead guitar attack and majestic organ, the musical direction of the band naturally leads to a path of early seventies ‘Deep Purplish’ styled progressive metal-infused rock. The recording process for this album seems extremely true to the techniques available in those early seventies rock years, no skulduggery or studio trickery, just a nice clean honest sound by skilful musicians.

Summary: A real treat for all music fans especially those rockers with a zest for real heavy blues rock and a tendency to want to get up and boogie.

And yes you are right we have some seasoned musicians among us. René Mollerup Sørensen our bassist started playing already in the late half of the 60ies. He started out playing what we in Denmark call “pigtrådsmusik” or “barbedwire music”. It is a slang for Mersey Beat / Rhythm & Blues. He still plays that genre in another band “Dreamers” which I think have existed in more than 25 years now and they have played countless venues and festivals in Denmark during that time (they have a Danish webpage here: http://www.dreamers-live.dk/). He also brought in the West Coast / Country music, which he plays with the band Third Wheel Drive (https://dadk.facebook.com/ThirdWheelDrive).

It just so happens that René is my dad. I am one of the two guitar players in the band (Danny Mollerup Sørensen), so I guess not many guitarists can say that they actually get to rock out with their dad ;). But naturally I have been somewhat affected by my father’s passion for music during my childhood and I started playing seriously around the age of 16. My taste of music quickly developed and I got more into the harder stuff, from classic rock to heavy metal and later I became very interested in progressive rock when I started playing with Mikkel Henderson in his band called “Circus Mind” (Mikkel is now playing in the band Fate which sprung off from Mercyful Fate). I however took a hiatus from music before things got really serious and ventured for an academic career in science. I never stopped playing though and I got to pay for a lot of my tuition fees during my studies by playing at local bars and in cover bands (good lad!). Around 2011 though I wanted to play more seriously and I met up with a another guitarist. At that time I hadn’t been playing for some time so I knew no one to call to help us out, except … my dad. Luckily he agreed to help us and the other guitarist knew a great singer whom he had played with before, that could actually sing all of the classic rock hits at the right key. That singer was Peter Castella who now front line Magic Brew as the lead singer / harmonica player.

Peter started singing at the late age of 40 but had been playing the harmonica since he was a kid. He started his career as a singer though by accident when he played in a small band with some of the fathers of from his son’s school. As Peter puts it: “Of course I had to play the harp. The other two in the band played guitar and bass respectively, and the bassist had previously sung on a stage in his youngdays. “Unfortunately,” he had a sore throat that day, and I was set to try to sing. At first it was just a chilled tune that was sung in a normal voice and it sounded miserable. Then the guys said I should raise it one octave and fire it off. I did so and blew them down from the chairs”. We were joined by Hans Gufler who then played drums in CeoNeo (https://ceoneo-us.com/bio) and called ourselves “Woodstock”. We mainly played “Classic Rock” covers – everything from Led Zeppelin, Deep Purple, Sabbath, Mountain, Free to Nazareth and AC/DC. It was really fun for a couple of years and we got to gig around the country at different venues and festivals and even got some studio recordings done, but the desire to write our own music grew quickly. Not everyone in “Woodstock” would sacrifice the extra time needed for the work required in such a process. But the decision was made, so in 2016 it ended up that Peter, Danny and René continued in the new direction. Peter knew Jesper Lusty from a local blues duo they had together. Within a fewmonths, Jesper then joined the tabs. And a little later, Magic Brew became a reality when metal drummer Lars Østerberg had seen an ad we had desperately created somewhere out there. Both Jesper and Lars had a significant history of their own. Lars have an extensive career in the metal scene in Denmark and started playing drums in the 80ies in the Danish trash metal band “Rigor Mortis”. They played at different venues around the country with other early metal bands like Maltese Falcon, Evil, Witch Cross and Wasted and also got to tour in England in 1985. He since played in a lot of different metal acts through the nineties and ended up in the thrash metal band “Symbolizer” (http://www.symbolizer.eu) before he changed the genre and and joined Magic Brew in 2016Jesper Lusty on Guitar and Keyboard, who was still in elementary school when René started his musical career, started playing Heavy Rock and Prog Rock in the mid 70’s until the late 80’s in the bands Firefly, Rambuk and Retouche. Most years, the instrument was the bass. The year that I was born (Danny, 1981) Jesper shared jobs and venues with one of the few other bands that kept the hard rock alive in Denmark at that time, namely “Brats” who later changed their name to “Mercyful Fate”. In the following 20 years, Jesper’s musical life consisted of working as a music teacher, writing children’s music and children’s theater, and performing it with school students. On his 50th birthday he found was missing playing music with real grownups and started playing in local cover bands, just a bit of fun. This is when he met Peter Castella and later joined Magic brew in 2016. Jesper’s amazement was great when, after playing with René for a while, realized that it was the “Mollerup” that he had repeatedly heard for almost 20 years as a fantastic and musical bass player through common known musicians, but without having met before.

Anyway, in the current setup we have only played together for four years and in that time we have focused solely on establishing and recording our music which now have been released on the album. We chose to make an album completely ready before going out and taking jobs, as we all have plenty of playing experience from various other bands. So we’ve only had a few jobs just to try the concept. Due to Covid19 our scheduled jobs during the summer have been cancelled, but we are working hard now to establish a jobs for the coming year and have plans on doing a tour of Denmark in 2021. However, things are not silent on the front of making new music either and we are already in the process of writing the tracks that sets the outline for a new album.