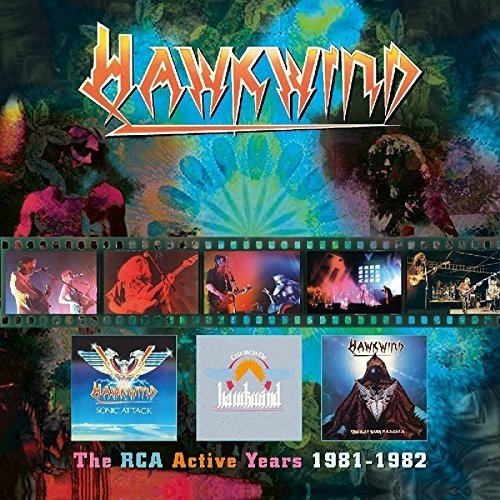 There have been quite a few re-releases put out by Cherry Red Records which span the recorded output of Hawkwind and it’s spin-off tribuatories. Besides the RCA years, the subject of this review, the “Active Years 3CD Box Set’s” also include those from the GWR and Charisma label periods. The time span for the RCA years was quite narrow lasting only from 1981 to 1982 however they did manage to record three albums during this period “Sonic Attack”, “Church of Hawkwind” and “ Choose Your Masques”. They also, during this period, headlined the 1981 Glastonbury Festival appeared at the 1982 Donington Monsters of Rock Festival, and also featured at the summer solstice during the Stonehenge Free Festival so basically it was a very busy period for the band at this time. The personnel of Hawkwind has always been extensive and complicated with musicians coming and going and others being drafted in for guest appearances and tour dates but the core personnel for these three albums remained remarkably static even though the time keeping of drummer Martin Griffen was an area of much concern in this period..

Despite the fact that so many bands have tried to duplicate a “Hawkwind” space rock style of music only a few have ever really succeded and it remains that they, “Hawkwind” even after forty odd years still continue to be  the main exponents of this genre. The really clever thing about their music is that within the basic framework of repetitive loops and staged build up’s there are subtle changes which progress the music ever forward and as such gradually allows the sound to increasingly expand into crescendo’s of keyboard chords, guitar riffs and electronic noises. “Hawkwind’s” music, to my ears anyway,relies on rythym, speed and pace more so than melody, harmony and charm. The vocals too are never what you could call striking or stunning and are quite monotone in nature but the overall trance like sound produced does, without doubt, generate enormous excitement and totally encaptivates the feeling of space and space travel. The three albums in this set are very good and are from what I think was the second most interesting “Hawkwind” period following on from their brilliant Levitation album (Also available on Cherry Red). This three CD box set would certainly appeal to any young progsters who have just discovered “Hawkwind” or any old gits like me who have holes in their collection or more likely where their vinyl copies have got trashed over the years.