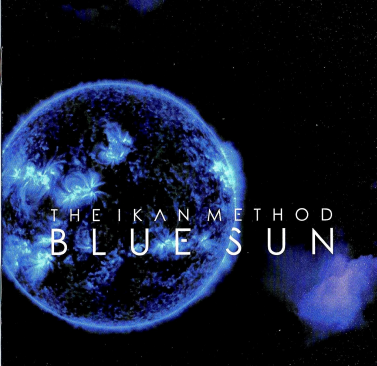 It is always such a motivating situation when reviewing an album to come across those musicians who have dedicated their professional careers to playing in bands without particularly seeking the limelight themselves. Such stalwarts contributing greatly to the music and identity of the band(s) they represent. So when these reliable team players engage in their own solo projects it is just so heart-warming when a cascade of skilled musicians willingly lay themselves on the line to contribute to the mix. Such a case in mind, the subject of this review, is Luca Grosso, former drummer of “Projecto, Narrow Pass, Rome Project and the Marcello Chiaraluce Rock Band”. For his debut album, ‘Blue Sun’ Luca has assembled a superb posse of top-notch musician friends under the banner of “The Ikan Method”

‘Blue Sun’ is an interesting album comprising of nine extremely melodic tracks drenched in succulent guitar and flowing keyboard arrangements. There is throughout a very sing-along uplifting feel stamped into the overall body of the music with oodles of beautifully well thought out and coordinated instrumental passages. Not only that but on subsequent plays so much more depth of musical proficiency has revelled in the form of many little hidden treasures, wonderfully tuneful bass lines, exquisite flute, adorable lead guitar inserts and driving percussion. Whilst there are many time-changes incorporated the entire affair is delivered at quite a pace throughout with a distinctively symphonic feel created by swathes of flowing keyboard, and synthesiser chord progressions.

Davide Garbarino has a pleasant harmonious vocal delivery and handles the singing duties with a tuneful confidence especially the fact that he sings in English. It would have been interesting for at least one of the songs to have been delivered in Italian in order to draw a comparison of his pitch and enunciation in his native tongue. But certainly, considering the allegro pace of the music, he does a great job and adds a certain panache to the proceedings…

Clearly, in the assembly of this album, there has been a complex series of overdubs and mixes which, no doubt, has been a huge and complex sound engineering project. In this respect ‘Claudio Cattero’ has carried out an excellent job, at the ‘Manifatture Musicali’ studio of San Didero.

Summary: An extremely enjoyable progressive rock album with a nod towards bands such as ‘Warhorse’ and Man.

Born in 1972, he has been playing since 1989 and started studying music in 1993. Having always been fond of hard rock and progressive, after playing in local bands, in 1996 he joined Projecto, power-metal band from Savona with whom he recorded two albums (Projecto, 1998 and Crown of Ages, 2000) and a song for a tribute to Savatage (A Tribute to Savatage – Return of the mountain king), all for the Underground Symphony label. The group also records a cover of Warlord’s “Deliver Us”, never released on disc though.
In 2002 he joined the Beggar’s Farm, a tribute band to Jethro Tull, with whom he played on a permanent basis until 2005 and continued to collaborate until around 2010.
With them he recorded some live tracks on the cd “Itullians” and on other cd dedicated to the fan club, with songs from the repertoire of Jethro Tull, PFM, Genesis.
He plays pieces by De Andre ‘together with Aldo Ascolese, and participates in live concerts and conventions where he plays with the likes of Bernardo Lanzetti and Giorgio Piazza (PFM), Rodolfo Maltese (Banco del Mutuo Soccorso), Mick Abrahams, Clive Bunker, Jonathan Noyce, Dave Pegg, Glenn Cornick (Jethro Tull), as well as attending the Jethro Tull 40 years convention in Alexandria in 2008 where there were about fifteen past and present members of the Jethro Tull, including Ian Anderson.
From 2010 he began playing with the Marcello Chiaraluce Band, which later became a trio. After a cd already active, “On A Winter Walk” of 2007, he enters the studio for the recording of “Cryme Of The Rhyme”, the second cd that sees the light in 2014 and that plays entirely. The genre is rock, in all its nuances.
In 2016 the third CD was released, “When The Dollhouse Burns”, a work performed in a much more direct and mature trio than the previous one.
With Chiaraluce, having shared the stage with Beggar’s Farm, he has the opportunity to open a concert for the Modena City Ramblers in Castagnole Lanze, and to play among others with Roberto Tiranti, Tolo Marton, Paolo Bonfanti, Giorgio Piazza, Aldo Tagliapietra.
In 2009 he met Mauro Montobbio and joined the Narrow Pass, a progressive band, where the collaboration and friendship that still lasts today began.
Thanks to Montobbio he met Vincenzo Ricca and recorded 4 pieces on the disc “The Rome Pro (g) ject, together with David Cross (King Crimson), Francesco Di Giacomo (Banco), John Hackett, Steve Hackett (Genesis, Gtr, SH Electric Band ), David Jackson (VDGG), Nick Magnus, Richard Sinclair (Caravan, Hatfield and the North, Camel) among others, which also contains an original piece of the Narrow Pass, “In And Around The Colosseum”.
Record with them a cover of “How can I?” for the tribute to Steve Hackett ‘Steppes Beyond The Colossus’ (2014 – MELLOW RECORDS) and an original piece that is part of the DECAMERON – TEN DAYS IN 100 NOVELLAS – PART II (2014 – MUSEA), a 4 cd box inspired by the Decameron .
The adventure of the third Narrow Pass “A New Day” also begins, which sees the light in December 2014, great progressive rock work well reviewed all over the world on which John Hackett also plays the flute.
In 2016 the “The Rome Pro (g) ject II – Of Fate and Glory, with Steve Hackett, David Jackson (VDGG), Billy Sherwood (Yes / Circa / Solo) and Vincenzo Ricca, where he plays in 2 pieces, is also released.
To remember the collaboration with Last Rites, Thrash-Death Metal band of Savona, with the piece “Psycho Killer”, recorded more than 20 years ago, and the piece “Fallen Brother – Glory to the Brave”, contained on the album ” Nemesis ”
Also worth mentioning is the “Lady Miriam” project, with “Guardian Angel”, where we find members of the Narrow Pass together with Alessandro Corvaglia (La maschera di cera).
From autumn 2019 he joined the power-prog metal band Mindlight (the group of which Davide Garbarino is the singer), which is preparing the first album.