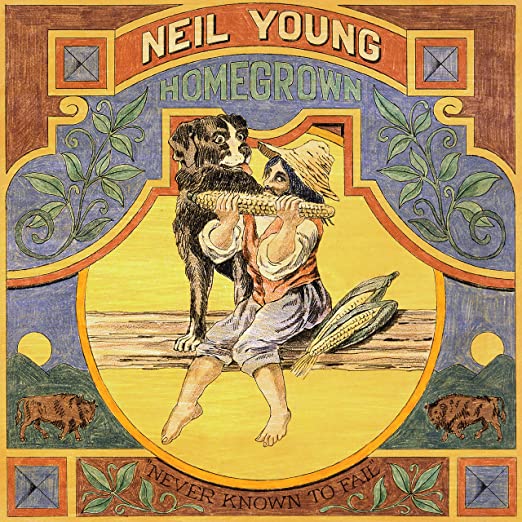 This 2020 release is one which has been sought after by fans for many years, as it was originally recorded between June 1974 and January 1975. ‘Homegrown’ was intended to come out in 1975 before Young cancelled the release and has remained unreleased until now. It has achieved legendary status among Neil Young fans, as it was described as the unheard bridge between ‘Harvest’ and ‘Comes A Time’. As with ‘Hitchhiker’ here is a release from the vaults, but yet again this is one which more than stands on its own musical merits. Perhaps it is best to let Young explain himself.

“I apologize. This album ‘Homegrown’ should have been there for you a couple of years after ‘Harvest’. It’s the sad side of a love affair. The damage done. The heartache. I just couldn’t listen to it. I wanted to move on. So I kept it to myself, hidden away in the vault, on the shelf, in the back of my mind….but I should have shared it. It’s actually beautiful. That’s why I made it in the first place. Sometimes life hurts. You know what I mean. This is the one that got away. Levon Helm is drumming on some tracks, Karl T Himmel on others, Emmylou Harris singing on one, Robbie Robertson plays on one. ‘Homegrown’ contains a narration, several acoustic solo songs never even published or heard until this release and some great songs played with a band of my friends, including Ben Keith – steel and slide – Tim Drummond – bass and Stan Szelest – piano. Anyway, it’s coming your way in 2020, the first release from our archive in this new decade. Come with us into 2020 as we bring you the past.”

The album is made up of twelve Neil Young songs, of which seven are previously unreleased, with the other five all appearing in different mixes on later albums. There have been various theories given over the years as to why the album was pulled, but his comments above give credence to the one where he was dealing with his breakup with actress Carrie Snodgress, the mother of his child Zeke, and the songs were just way too personal. That this album was pulled by an artist arguably at the height of his commercial prowess is quite a statement, but for whatever reason it was never due to the lack of musical quality. Just listen to the title cut which has filthy joined guitars over the top of a rhythm section who are tied together, the very epitome of Crazy Horse, and then compare that with the acoustic brevity of “Kansas” which is sheer beauty, polished and refined.

Everyone knows Young’s archive is huge, and one can only wonder what we will be treated to next.