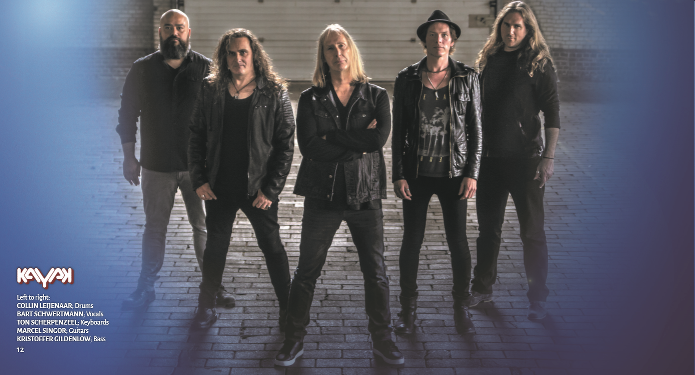 A majestic and melodic ”Kayak” ride

Sometimes when these older and previously more established named progressive rock bands try to reform or generally carry on trading upon the success of their previous greatness it can often prove to be a distinctly huge disappointment. But, believe me, this seventeenth studio album by Kayak, due to be released in Europe on January 12th 2018, is quite magical, full of beautiful melodic passages, wonderful keyboard/guitar interchanges and lovely symphonic instrumental arrangements. In fact, the entire affair is a total delight from start to finish completely refreshing with the more melodic “Kayak” trademark sound coming to the fore rather than their sometimes more jazz-tinged complex musical side. Maybe the influence for this oh! so melodic album, so rich in piano and swirling keyboard patterns, was due entirely to the original and founder ‘Kayak’ member Ton Scherpenzeel who wrote and composed pretty well all of the material but much praise must be lavished upon axeman ‘Marcel Signor’ for providing oodles of utterly majestic and exquisite guitar.

I wasn’t too sure about the vocals from ‘Bart Schwertmann’ on first play thinking that the projection of his lyrics in English sounded a bit awkward and wondered whether they would have been more suited to the Dutch language. However, over subsequent plays, I found myself enjoying his voice more and more and realized that there is a  real warmth to his style which not only totally captured the classical ‘Kayak ‘sound of old but which also stands well for any future ‘Kayak’ projects where the versatility of his delivery will greatly expand their musical options into many other areas.

There is some confusion in respect to the rhythm section of the new Kayak line-up as the two players now drafted in; bass player ‘Kristoffer Gildenlow’ and drummer Colin Leiijenaar complete the membership, for touring purposes I guess, although strangely they hardly featured on the album. Both though have played with the ‘Neil Morse Band’ and so should serve the band well for the future of the band as a practised unit.

A particular treat is the inclusion of ‘Camel’s’ Andy Latimer as special guest on the only instrumental of the album entitled ‘Ripples on the Water’ Ton Scherpenzeel exclaimed “I’ve been fortunate enough to work with him in Camel. We have a great musical and personal click. Andy personifies the word “feeling” for me, and that is what ‘Ripples on the Water’ is all about. Andy is truly one of the greatest guitar players in the world and I’m very honoured and proud to have him as a special guest on the album”

Summary: A beautifully melodic and well-constructed album with a superb array of keyboard and guitar interplay.