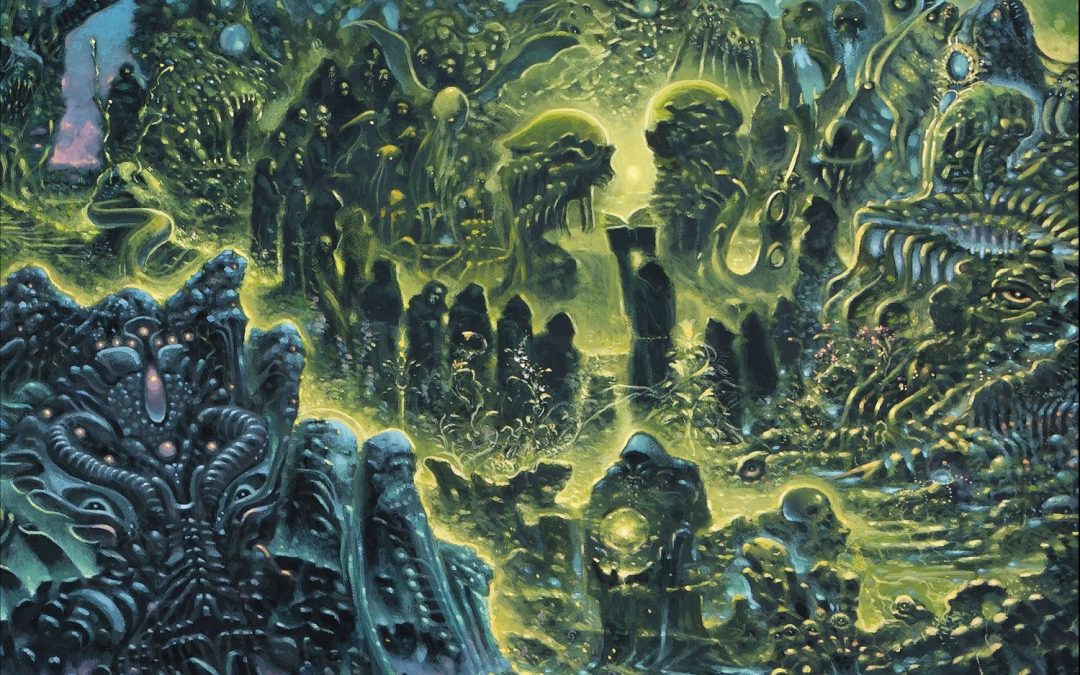 US label CADABRA RECORDS has been an ongoing entity since 2015, specializing in limited edition spoken word productions released as vinyl singles, EPs and LPs. Rather than merely having the stories they select recited by experienced people in the craft, they have also used music to emphasize the stories told. The stories themselves are all of the horror variety, by more or less well known authors in the field. Among the more recent of their productions we find “The Festival”, on of the many stories penned by legendary author H. P. Lovecraft.

This just over 30 minutes long production was released just before Christmas in 2020, and as the story told here takes place in the Christmas season that is rather appropriate. The story itself isn’t among Lovecraft’s best in my opinion, as the horror aspects of it has faded a lot with time. At the time it was written it will undoubtedly have had a stronger effects on the people reading it, but for sheer horror effect this one is a few leagues short of Lovecraft’s best writings.

Voice actor Andrew Leman does a fine job of reciting the story, with a suitable restrained style throughout that makes the sense of suspicion, intrigue, awe and horror experienced by the storyteller come alive in a suitably realistic and recognizable manner. Which in my opinion is much more difficult to accomplish than what one might think, due to Lovecraft’s tendency to use overly dramatic words and phrasings that invites readers to recite the story in a more overtly theatrical manner. By grounding the recital in a more dampened mode of delivery Leman pulls out the best of the story and manage to create and maintain a strong tension throughout.

The score for this production adds a dimension to the proceedings I haven’t really heard on previous released by this label. Rather than having a more unobtrusive backing soundtrack, this time around a score with several distinct themes have been used, with expansive and expressive sections based around the idea and foundation of an orchestral score. While what I suspect is the Mellotron stars alongside both various keyboards and synthesizers, orchestral strings, the piano and the flute are also prominent throughout, making this aspect a feature almost as much as the recital of the story itself. All of this has been created and performed by composer Fabio Frizzi.

For my sake this is one more high quality item of spoken horror that comes courtesy of Cadabra Records. If you have an LP player available and enjoy horror stories, this is a label that deserves your attention. And while this specific production may not be the one that sends deep chills down your spine, this is a product that at least should be found desirable by most fans of Lovecraft. Even if in this case we are given a better performance than story. All in all a solid production in my view, with the choice of story to cover just about the only slightly weaker part of this one.