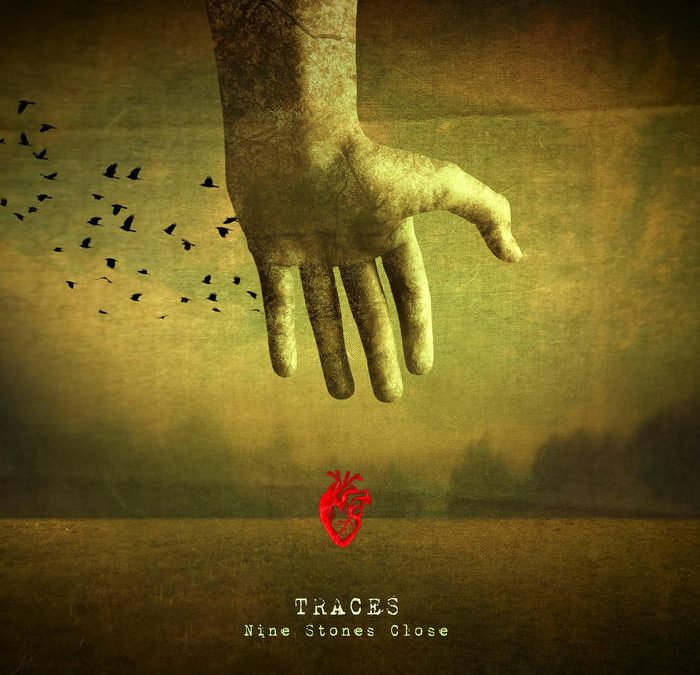 To celebrate the 10th anniversary, Traces has been completely remixed and remastered by producer and engineer, Paul van Zeeland, and also prepared for its first-ever release on deluxe Limited Edition vinyl. The remix sounds spectacular and provides a fresh view on the original mix while retaining the spirit and feel of the original album and in addition, the package includes stunning new artwork by ‘Antonio Seijas’

‘Nine Stones Close Band’ is the brainchild of English guitarist ‘Adrian Jones.’ who had settled down with his family in the Netherlands after taking up an attractive job offer. This was several years after a serious car accident in France, involving himself and his family and for himself a lengthy period of convalescence. And so the move to the Netherlands offered a fresh start, particularly getting back to playing his guitar, a pleasure he had neglected for some time. Initially, as a solo undertaking, the seeds were sown to move forward with the idea for a project. This idea came to fruition in 2008 as a privately released album entitled ‘St.Lo’ under the guise of ‘Nine Stones Close’. For the curious:-  ‘Nine Stones Close’ is a small stone circle on the edge of ‘Harthill Moor’ in Derbyshire, part of a rich prehistoric landscape that includes Bronze Age barrows and settlement enclosures.

The transformation of ‘Nine Stones Close’ from an ‘Adrian’ solo project into a working band started to take shape in 2009 when ‘Adrian’ was passing out copies of his ‘St Lo’ CD at a ‘Marillion’ Weekend in ‘Port Zélande’. It was here that he met up with the ‘Riversea Band’ Keyboardist Brendan Eyre. This meeting led to an exchange of instrumental participation in their individual projects. More specifically Brendan added keyboard parts to the impending ‘Traces’ album. Furthermore ‘Brendan’ introduced vocalist Marc Atkinson and soon after bassist and guitar builder Neil Quarrell joined the project.

It is true to say that at this early stage of the band’s existence, the term ‘project’ was actually the operative word being material composed and arranged by Adrian. Generally, on ‘Traces’, by sending out the basic tracks to the other guys for them to add their parts.

‘Traces’ is indeed a beautiful album and indeed a deserved choice for a timely reissue, hopefully, it will attract more attention from both the fans and music press then when it was previously released in 2010. It is above all a very atmospherically inclined well-fashioned album with gorgeous combinations of acoustic guitar, lead guitar and assorted keyboards.

There is a totally relaxed warm and laidback feel to the proceedings where, in particular,  the wonderful variety of keyboards create a dreamlike presence that washes over and flavours the music with a delicate charm from start to finish. The relaxed warmth and laidback feel to the proceedings are further endorsed with the trancelike and simply wonderful vocals that are mostly projected with a rare softly delivered sensitivity. The drumming throughout is amazing with such a variety of tempos and providing the background energy together with the tuneful bass driving the music forward

There are so many endearing features that contribute to the beauty of this album but the main focal point of interest has to be the fascinating guitar lines that weave and shape their way through the various soundscapes. There is a staggering variety of guitar interpolations bursting forth throughout the five tracks all creating different levels of dramatic intensity and varieties of compositional texture.

Summary: This is a wonderfully melodic album full of drama, brilliant vocals and superb musicianship.

All music and lyrics by Adrian Jones, except ‘Falling To Pieces’ – lyrics by Marc Atkinson