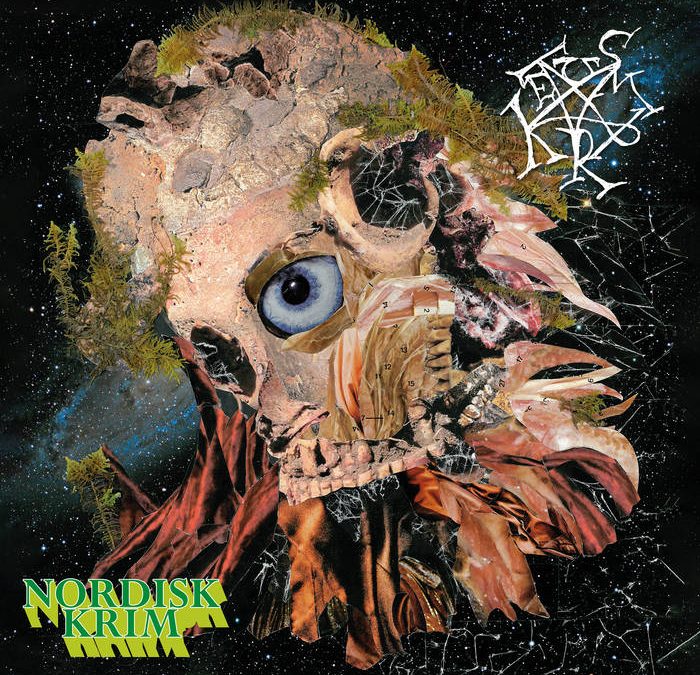 Forming together in 1994 in the town of Skien, Norway as “Les Fleurs du Mal” they changed their name in 2008 to ‘Tusmørke’ (Twilight).  Initially, they, plus many other bands on the Scandinavian music scene, took their inspiration from the prog-psych-folk luminaries from the seventies.  Bands such as the likes of Gong, Caravan, Focus, Incredible String Band etc.

Gradually though the quality of the home progressive rock music scene built to an extremely high level with some outstanding bands coming to the fore generating the highest quality music on par with their European counterparts.  Without a doubt, one such band producing interesting, dynamic and unique music is ‘Tusmørke’

Slightly confusing is that Tusmørke’ line-up is drawn from several bands such as Wobbler, Jordsjø and Alwanzatar.

There is no confusion though as to the splendour of the music on this ten-track album entitled “Nordisk Krim”, the subject of this review.  Music that twists and turns at every corner with a multitude of time changes, complexities of direction, pace and spiritual inclination. In its entirety a ‘veritable wall of sound’, a sheer bombardment of energetic forces coming at you at all angles in the form of melodic instrumental passages. It is a concept album telling the grizzly story about Danish ‘Iron Age’ swamp mummies, in fact it is a vivid recollection from schooldays of visits to museums where images of Red-haired, Black-bodied creatures play tricks on young imaginations. Indeed the subject matter for a future progressive rock album, which was kept on the back burner, until now and at last seeing the light of day.

Many instruments grace their presence on this album but in particular, wending their way through the various soundscapes, are exquisite flurries of melodic flute. These ethereal trills are present throughout the entire score rasping their way through both the symphonic calm and the sections of cacophonic audio madness. Such audio madness you soon realise as being essential to the dynamic storyline and not just an excuse to explore quirky excursions into superfluous experimental sound. Without doubt, a really smart way of creating the darkish and haunting atmosphere to accompany such a grizzly tale. That is utilising these chaotic bridging interludes of discordant sound.

What is interesting is the reoccurring theme common within the structure of the music based on the use of repetitive countermelodies which are mostly facilitated by flute and keyboards. Both instruments in synchronous union playing identical passages in deft harmony. Such manoeuvres creating a gorgeous and delightfully nice tuneful effect.

It is an album requiring a high level of technical brilliance throughout with the need for tight interplay and timing between all instruments. Especially true for the powerfully dynamic drumming with the complicated and awkward time signatures demanding to be observed throughout. The entire score too is blessed with a myriad of wonderful solo parts, such as treated guitar, flute, and keyboards and other interspersed violin delights.

The vocals need a special mention because they are wonderfully delivered in a way that is absolutely perfect to suit the character of the music and in doing so adding both flavour and depth to the atmospheric brilliance of the music flow.

Summary: – A masterpiece of technical brilliance and explicit musical storytelling

Tusmørke on this album are Benediktator (bass & vocals), Krizla (flute & vocals), HlewagastiR (drums), Haugebonden Gode Gullstein (keys) and Åsa Ree (violin), Everything was recorded and produced in Benedikator’s home studio (Det Ytre Rommet), except field recordings and some bubble noises recorded in the bathtub (The Bubble Bath of Blood).

The title Nordisk Krim (Nordic Noir) refers to the fact that the bog bodies were first thought to be a police matter. In reality, the true crime was disturbing the gifts to the gods in their slumber. Nordisk Krim celebrates the willing victims of ancient rites, those whose bodies are in the bog but whose souls are among the stars in the heavens.