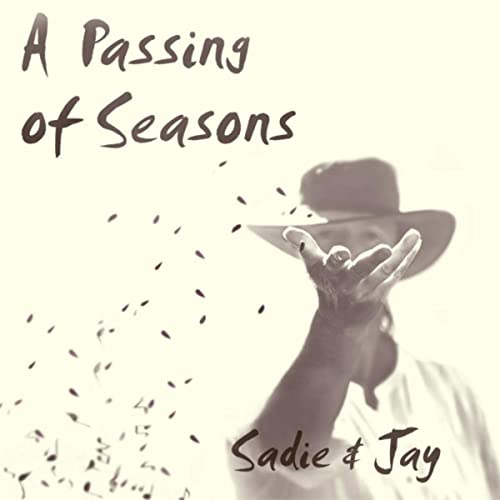 Recently I was fortunate enough to attend the Auckland Folk Festival, one of the most enjoyable musical events I have ever been to, and one I will be definitely returning to next year. I knew very few of the acts, but I was determined to catch as many as I could and used the programme to mark off the ones I needed to hear. One of these was Sadie & Jay, a duo of Sadie Gwynn Jones (vocals, double bass) and David (Jay) Penman (vocals, various guitars etc). On their main sets they were joined by violinist Rachel Miranda Evans, who they originally met at the Wellington Folk Festival, and had been told to just go with the musical flow and improvise over the top. After their first main set I caught up with Sadie, and introduced myself, saying how much I had enjoyed their music. She reached into one of the instrument cases and then presented me a copy of this their latest album, recorded in 2019. It was certainly unexpected, and not why I had been speaking with her at all, but it does mean I have been able to spend far more time investigating their music.

Although David is Scottish born, and raised in NZ, he has been living in Australia for a number of years, where he met Sadie at a folk event in 2012. They decided to see how things would work out and given they have now recorded three albums and have emigrated to NZ together, I guess it is going okay (so far!). When I first saw them play, and I managed to grab all their sets that weekend, I immediately thought of Mundy-Turner, as they have a very similar approach indeed, not only in their music but also their lyrics. Each of the songs on this album is an Australian story, and the booklet contains not only the words but details behind the event itself. One of my favourites is one they also performed at the festival, namely “Salvation Jane”. One has to feel a pang of sympathy for Jane Paterson, who planted some seeds to beautify her garden only to find it escape, and it is now regarded as a noxious weed that has covered millions of hectares of land in Southern Australia, where it is widely called Paterson’s Curse. Another which really stands out is album opener “Dust To Ashes”, telling us the story of the ancient Aboriginal site of Ngarrabullgan, which was renamed Mount Mulligan by settlers and the site of a huge explosion killing 75 people in what turned out to be Queensland’s worst mining disaster.

The music is delicate, with both providing lead vocals at different times, then providing harmonies when the time is right. The bass is often plucked, providing a deep resonating bottom end, with Jay providing guitar or banjo, delicately picked, and other instruments coming in when the need arises. It is always the vocals and stories that are front and centre, with the accompaniment all about providing the backdrop and emotion, with “Leaving The Harbour” being particularly violent and emotional at times. Overall, this is a really enjoyable folk album with great Australian stories, reminiscent in that respect not only of Mundy-Turner but also of Maryen Cairns and is well worth full investigation by any lovers of great acoustic music.