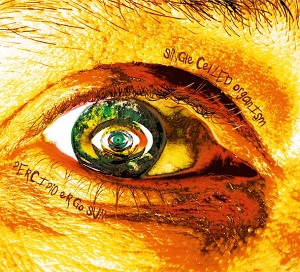 At the outset of his career Hamburg based multi-instrumentalist ‘Jens Lueck’ applied his classically trained leanings towards a more pop-, jazz- and rock-music direction with a special affinity towards Pink Floyd and Genesis. A course that initiated his decision to put together his own band, writing and recording his own material and subsequently developing a keen interest in audio engineering. A route subsequently leading to University and a successful career in sound engineering within the music business.

‘Percipio Ergo Sum’ is the second album under the guise of ‘Single-Celled Organism’ the first being ‘Splinter in the Eye’ released in 2017.  This 2021 recording similar to his first album is a Progressive / Art rock extravaganza that once again is a concept album that and continues the story laid down in the previous album ‘SPLINTER IN THE EYE’. A storyline which, whilst interesting and a vehicle for the music, is fortunately not necessary to engage to seriously within. Although I have included an outline below of the storyline.

‘Percipio Ergo Sum’ (‘I Perceive, Therefore I Am ‘)  the new solo-project of ‘Jens Lueck’ is a glorious and illustrious mixture of harmonious allurements served up upon a huge platter of Neo Progressive Rock delights. Such a platter comprising twelve delicious helpings of gorgeous saccharine rich soundscapes saturated with wave after wave of delicious melodic hooks and superbly engineered instrumentation. The entire affair bombards you with well-crafted unifications of flowery keyboards interlaced with various guitar chord sequences and runs. But such combinations are presented with complexity and style as the resultant note amalgamations shift through multitudes if time changes, modulations of pace and then the eventual achievement of climatic fruition. But quite surprisingly, in doing so, all the while the music maintaining its goal of providing melodic saturation. Even the bass guitar strives to follow suit with the need to fulfil harmonic unity with the sweetness of the guitar and keyboard proliferations.

It would be no surprise to discover that from a vocal perspective ‘Jens Lueck’ vocal delivery is perfectly pitched to suit and fit in with the tone of the music with the result that both the intonation and range is brilliantly executed and in parts has a distinct resemblance to David Bowie. Female support from close associate’ Isgaard’ is also quite wonderful, clearly, she is a trained singer with a most beautiful voice full of engagement and oodles of panache.

Summary: It is important to stress, that whilst the direction of the music on this album tends towards progressive fulfilment and it does so with a distinctly classical edge rather than steering along a middle path of adult orientated rock. All of the arrangements are well worked out and are done so with layers of unexpected complexity and finesse.

Additional Info PERCIPIO ERGO SUM is again a concept album and carries on the story of the previous album SPLINTER IN THE EYE. The two protagonists have survived the fall of civilisation and the reconstruction and suffer – each for himself, without meeting each other personally – from the past as well as from the present. The “brave new world” displeases both of them, but in different ways. At the centre is the so-called TV girl with her perception of civilisation, of people, of the world per se, because all this is completely new to the early 20-year-old woman, who has spent 16 years as an experimental subject in a sealed-off bunker (without knowledge of the existence of the outside world/other people).
In essence, she is fundamentally different from the other people who are either opinionless, uninterested citizens or are decisively influenced by the Cartesian world view (“cogito, ergo sum” = “I think, therefore I am”).
Her credo is PERCIPIO ERGO SUM (= I perceive, therefore I am), because she sees herself as part of a whole and defines herself through interaction.
The attitude of both protagonists can certainly be understood as a critical view on humanity in the age of the Anthropocene.