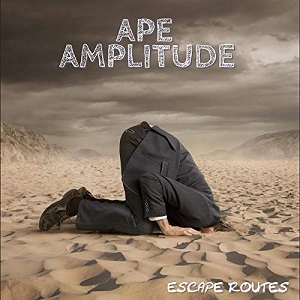 Genre Symphonic Prog
Release Year 2019
Origin Germany
Format CD
Total time 79;50Website URL www. Myownmusic.de/APE AMPLITUDE
The coming together of various musicians to form a working partnership or a band can and always be a fractious procedure. There are so many factors that need to be taken into account in terms of personalities, musical direction, management and overall setting up costs. Furthermore, band formation is quite often the result of the more talented musicians from various local bands fusing together to form a stronger unit. However the recent acceleration in technical developments with
respect to music, over the past decade or so, has opened up alternative means for communication.
Thus providing musicians with a vast array of tools to aid in the compositional and sound development processes within a home studio environment. But one area that is seemingly being more and more exposed, to great effect, is the means by which like-minded musicians can communicate together via online music portals. This is the case whereby seasoned musicians Achim  Wierschem and PeterZahn got together utilising the German music portal ‘My Own Music’.
Their association produced many joint enterprises over the years but it was only recently that they embarked on a full-blown joint CD project with the band moniker ‘APE Amplitude’ and the CD title  ‘Escape Routes’ the subject of this review.
With just under eighty minutes of sumptuous symphonic progressive rock music ‘Escape Routes’ is indeed a glorious assembly of beautifully delivered guitar and keyboard, an extravaganza contained within nine epic tracks that transport you deep into the realms of utter progressive delight.
It is indeed a complete instrumental listening experience with very little vocal intervention to distract you away from a path of deeply rooted instrumental concentration as the music glides and flows around you. If it were possible, given the time and inclination, to record and assemble every glorious instrumental break from your favourite progressive rock albums you would, maybe, be close to achieving the overall effect expedited by ‘Escape Routes’. But obviously, you could not ever achieve the overall smoothness of flow and the dynamic way in which these tracks have been assembled. All of the musicianship is wonderfully arranged and produced with perfect precision, every note, phrase, chord sequence, time change and structured harmonious layer is merged together in a seamless fashion. Indeed it is a colossal symphony with beautifully arranged keyboards and piano sequences forming a lush backdrop for melodic lead guitar arrangements and tuneful keyboard flurries. There is an abundance of lead instrumentation shifting between guitar and the various keyboards which are then in turn further coloured with delicate acoustic flavourings. As you embark on this mighty instrumental journey, you travel through many familiar soundscapes from the seventies progressive rock (Genesis) and blues scene (Peter Green) intermingled with many cinematic seasonings and oodles of sound clips. Superb variations of bass arrangements are embodied throughout together with a steady array of decent drums and percussion. It is, overall, a lengthy undertaking that might prove too much for some music fans to immediately engage with and take in all at once. But after several hearings, the flow of the music becomes far easier to digest and hence the individual sections within the various track boundaries a joy to absorb. It is an album to play frequently in order to gradually become one with the various structured arrangements and more particularly the correlation between the (Escape Route) track titles and the music itself. One thing for sure these two guys must have had lots of studio fun in the final stages of assembling this project together.
Summary: An Epic progressive rock undertaking both beautifully composed and assembled
Artwork: A delightful artistically styled Digipack
Line-up:
Achim Wierschem –Multi Instruments
Peter Zahn –Multi Instruments
With Andres Rexach Sebastian Schleicher (Amberfield) Byron Frey Martin Kuna Nadja Humeni

Tracklist: 1. A Long Painful Patch (32:51) – Chapter I – Departure (05:08) – Chapter II – Seawatch III
(10:10) – Chapter III – The Coast Of Europe (08:23) – Chapter IV – Deportation (09:09) 2. Last Exit
Suicide (6:52) 3. Dopeland (7:52) 4. The Drinker (5:22) 5. Turning My Back To The City (7:03) 6.
Virtual Reality (5:55) 7. Escape To The Womens Shelter (4:10) 8. Requiem For A Dying Planet (4:05)
9. A Little Light Of Hope (5:31)
From The Internet: Achim Wierschem, has made music in various bands since the age of 13 and has accompanied many well-known national and international artists during this time. His journey began as a guitarist and that he still loves this instrument for everything it has to offer. He’s had a long  career as a band member prior to his more recent personal endeavours, the most notable arguably being his long tenure in German band Flaming Bess, being a central part of that outfit for more than 30 years.
MINDMOVIE is the moniker used by German composer and musician Achim Wierschem for his solo
productions.