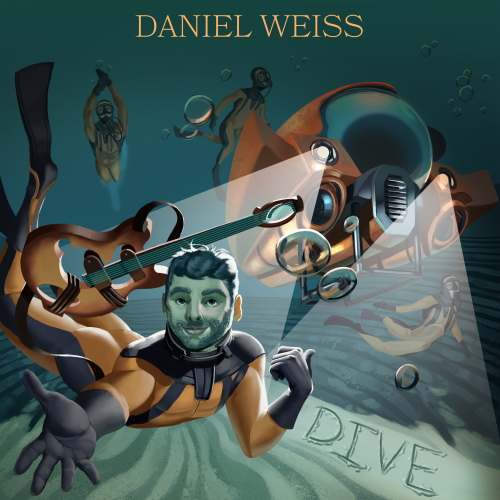 Initial thoughts suggested that a more appropriate reviewing platform, for this album, should be a publication like’ the renowned Jazz Times.’ However, even after first listening to Daniel’s debut album entitled ‘Dive’ proved to be a very interesting 43-minute slice of guitar inspired cool jazz executed along classical lines. But I would say that any suggestion that the music migrates up avenues of neo-prog sensibilities could be misleading to any future listener. It would be true to say though that there is an overall sheen incorporated into the structure of the music that quite disguises the underlying compositional complexities of the arrangements. Therefore, and in a sense, a clandestine repackaging of the harder jazz stylisation has been accomplished to provide a far more manageable musical form that is infinitely more acceptable to the progressive rock fraternity, hence the review here. Bearing in mind that ‘Dive’ is clearly jazz-inspired being played by a group of extraordinary jazz orientated musicians the direction of the music is of little consequence because it flows beautifully throughout the six tracks and one can totally immerse themselves in a wash of lush melodic dreamy cool jazz sounds.

Although Israeli-born guitarist, Daniel Weiss first achieved international recognition as a finalist for ‘Guitar Idol 2016’ and subsequently has cemented an international career as guitarist, composer, and arranger. It is only recently that he has had the desire to put together his own band and produce his own album. Certainly apparent with ‘Dive’ Daniel has given acres of space for the entire band, under his command, to equally contribute and perform as a single unit. In this respect and obviously working very closely with fellow composer keyboard maestro ‘Yaniv Taubenhouse’ they have together developed an entire score which allows the melding together of a whole range of different instrumental contributions. This compositional dexterity also extends to the variety of different soundscapes and moods ingeniously captured on this delightful album. It really is quite engaging how the intricate arrangements have been organised and in particular how ‘Daniels’ guitar brilliantly presumes control or alternatively fades to the background as the lead roles switch between the various instruments.

The various and many keyboard incursions are quite beautifully executed and provide a wonderful platform for Daniel to totally strut his stuff. Together they form a magical pairing with a clear understanding of each other’s sense of timing and rhythmical application. It is very clear too that the band is made up of the cream of the Israeli jazz fraternity. Especially intriguing is the interplay between the wonderful bass lines and extraordinary drumming patterns that continue throughout the entire album. Lovely saxophone contributions too.

Summary: A superb album of beautifully considered music, full of rhythm and drenched in layers of complexity and smothered in panache.

1) Land of The Dreamers

Track 1 2 3 4 & 6 Composed by both: Daniel Weiss and Yaniv Taubenhouse

He has released a string of projects, Such as Square To Check” which was met with huge critical acclaim. Daniel is also a Berklee College of Music graduate, and a co-composer/orchestrator with various top symphony orchestras in Israel. Daniel’s popularity has really peaked in recent years with shows all over the world, He Is featured over Lick Library, Premier Guitar, Guitar Idol, Normans Rare Guitars, and Bass The World