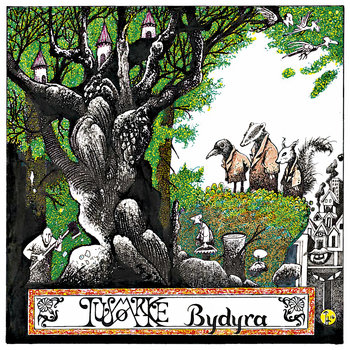 This is, without doubt, an extremely strange offering from the Norwegian progressive rock band “TUSMØRKE” because although it contains huge slices of good interesting music it was in fact written specifically for a children’s school in Oslo. The title “Bydyra” which translates to ‘urban wildlife’, comprises two original mini-musicals exploring social issues such as – global warming, financial problems and various forms of magic. The school children feature exclusively throughout the fifteen tracks as choral backing. The confusing thing though is that it is hard to believe this album was ever intended for a general worldwide release because it will never appeal to such a market. Maybe it might appeal, to a degree, in Norway especially the parents associated with the school involved or maybe even a hand fall of hard-core “TUSMØRKE” fans. And so here’s the rub; a review such as this can only be considered in comparison with other progressive rock/folk offerings being submitted at the time to the review team at House of Prog Radio

The music itself has a strong melodic tuneful flowing folk flavouring throughout with variable, in quality, male lead vocals and the backing of a children’s choir. Whilst a great deal of the singing is quite good, sounding distinctly similar in style to that of the UK band Caravan. Some of the vocals are quite strained and off-key and the choir for the most part seems badly mixed and off-centre. The use of silly voices at various points in the score utilized by the various vocalists doesn’t help endear you to the music. Actually, it becomes quite irritating on subsequent plays although I appreciate that some attempt at characterization here is being employed.

The exquisite flute throughout is quite delightful and the piano and other keyboard contributions are nicely executed to create an enjoyable atmospheric feel. The lead guitar unfortunately though served in mediocre portions, is totally superb and adds a  nice psychedelic edge to the music.

Summary: A folky kind of musical with children’s choir in support –vocals are exclusively in Norwegian.