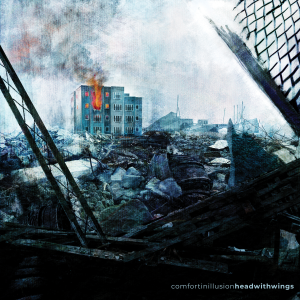 “We often start naive and green and either blossom into something remarkable, or we fizzle out – resigning to the life that we feared all along; the one we’ve been resisting – an uncertain path, a repetitive/menial existence, and the promise of a life without limitations. How far are you willing to go to either abandon or protect the way of life that you’ve been leading?”

These words paint the scene for the first act of alternative progressive rock quartet Head with Wings’ next chapter.

Amidst sweeping changes felt on a global scale, aspirations were put on hold, radiant futures dimmed, lives ended prematurely, and dreams were left to rot on the vine. For so many, the struggle was a silent one – a daily war waged alone.

On their forthcoming EP, “Comfort In Illusion,” Head with Wings draws the listener into the isolated, agonizing, and momentarily euphoric struggle for self-actualization amidst the stifling frame of an increasingly unfamiliar world.

The collective’s first output since 2018’s critically-acclaimed debut, “From Worry to Shame,” presents a concise summation of the group’s collective growth as artists and individuals. “Comfort in Illusion” dives deeper into the quartet’s textural and emotive sound exploration with a timely personal narrative of self-discovery and the anxiety of change.

Says lead vocalist Josh Corum, “‘The Comfort in Illusion’ EP has a two-fold meaning, but we realize that it’s subject to the listener’s interpretation and we fully embrace that. To the band, it operates in a binary fashion narratively; connecting to the protagonist of our debut album From Worry to Shame (2018), while also paving the way for an alternatively surreal story, that is told in tandem with a specific point in the protagonist’s timeline on the debut (parallel to the songs “From Worry to Shame” and “Beyond the Wall”).  Admittedly, this wasn’t my initial intention, but intuitively I wound up here some years down the line after these songs were initially conceived. The music on this EP isn’t motivically or thematically linked to the debut, but rather, connected through narrative/thematic concepts and visual interpretations through our music videos.”

“Of Uncertainty’s” hypnotic sway and surreal acoustic and electric voice-painting opens the three-movement suite in arresting fashion. A fitting bridge from the world of old to that of the new, the single embodies everything in seven crisp minutes that make Head with Wings a singular presence in a rock landscape that has been all too content to echo the hallmarks of yesteryear.

Cathartic and soothing, “Contemplating the Loop” exercises the group’s fluid command of abstract rhythm, leaving the listener to feel, rather than think their way through its floating, ever-shifting pulse. Anchored by Steve Hill’s silky bass runs, the song sets the constant ebb and flow of self-doubt and willful determination to sound.

Finally, the tumultuous voyage of “In a House Without Clocks” brings the concise three-track journey to a poignant coda. Bittersweet and overflowing with yearning, Corum leaves the listener with the parting questions: “Would you consider a life without a path … or would you fear it would all just fall apart—the plan that never started, the waters left uncharted?”

The odyssey feels both hopeful and grave—reckoning with an ever-fleeting sense of a gratifying future drifting further away each day, and the uncertainty of correcting course. The dark side of pursuing one’s dreams and the toll time takes on ambitions that were once so vivid are laid bare. Swelling into heart-searing vocal peaks and commanding streaks of expressive lead guitar, “In a House …” sets the tone for a pivotal moment of change, with Corum rising to the occasion as one of the eminent voices in modern alternative music.

The delicate beauty and lushness of “Comfort in Illusion” was carefully captured by Greg Thomas (END, Misery Signals) and Chris Teti (The World Is a Beautiful Place & I Am No Longer Afraid to Die) at Silver Bullet Studios. Thomas’ spacious, engrossing mix is heightened by Kris Crummett of Interlace Audio’s adept mastering – delivering a shimmering, modern sound that listeners will discover in new ways with each pass.

The themes of conviction and change etched into the fibres of these songs, are also reflected in the band, whose own internal makeup shifted in a similarly bittersweet way. Capturing what amounts to founding drummer Andrew Testa’s most stylistically definitive performance, the EP also serves as a fitting send-off for a member who was integral to crafting the core architecture of the band’s sound. His legacy will be continued and expanded upon through the deft percussion skill of Head with Wings’ resident multi-instrumentalist, Mike Short, who shifts from his co-lead guitar role on the recording of the new songs to drums going forward.

We can never again return exactly to where we have been, and the same can be said of the distinctive lineup of performers in their designated roles on this special output—a moment in time faithfully preserved.

“Comfort in Illusion” features a unique release format, with each song being followed by a cinematic companion piece delivered by the remarkably talented Vikram Shankar. The prolific composer, who was heralded for his expressive piano interpretations of songs on “From Worry to Shame,” expands his contributions to the Head with Wings collective with fully reimagined arrangements of each movement of the forthcoming EP. These remixes transform each track’s mood into a palpable visual scene listener can explore in their own personal way.

June 25th marks the launch of the Bandcamp pre-order for the “Comfort in Illusion” digipak CD/standard digital edition, along with the pre-order for the digital expanded edition, which contains the Vikram Shankar remixes and instrumental mixes.  As of today, all three songs from this EP are represented by animated music videos on the band’s YouTube channel.  All formats of “Comfort in Illusion” will be available on July 16th.

Says Josh, “Truthfully, each of our songs has its own message and baggage, but globally, I think the band would be in agreement that we want people to push themselves to lead a life that is self-fulfilling and not one that was either chosen for them, expected or assumed. We want people to find themselves in this world and then double down on who they are. Part of being an artist is giving yourself to the unknown and unabashedly believing in yourself, sometimes to the point of delusion. It doesn’t matter what you do, but that you love doing it. Have no regrets about believing in yourself. This band travels through the darkness to find empowerment and we want people to feel that too.”

All of the music/lyrics on this EP were written before the pandemic/quarantine. However, the band was dwelling on concepts of isolation and withdrawal on “From Worry to Shame,” where coincidentally, the protagonist withdraws from society for one year and then begins his reemergence as a “new man.” This EP occurs during his year of isolation.

The band is currently in pre-production for the next album, which will be the finale to the saga that was started on their debut. There’s talk about shooting a music video with Ingwar Dovgoteles (The Black Soil) in Ukraine for the next one and that is certainly exciting. Says Josh, “We’re looking to shoot more live-action music videos, as we’ve really gone down the rabbit hole with animated videos. Regarding gigs, we’re taking stock of the venues and festivals that are re-emerging, as society crawls out of the clutches of the pandemic. Though we’ve been rehearsing, we haven’t played a show since our 2019 tour in Germany (where we played Euroblast Festival).  We’ll be announcing new shows for late summer/fall on our Facebook page as they get confirmed. There is one festival on the books for us on May 20-22, 2022 which is Festival Terra Incognita in Quebec City.” Head With Wings is scheduled to perform at Space Ballroom in Hamden, CT opening for Moon Tooth on August 5th.

“Comfort in Illusion” was recorded at Silver Bullet Studios (Burlington, CT) between December 2019 and March 2020. The EP was tracked, edited, mixed and produced by Greg Thomas with additional tracking and mixing by Chris Teti. Mastered by Kris Crummett at Interlace Audio (Portland Oregon) in Fall 2020. All songs were written and performed by Head with Wings. Releasing July 16th.