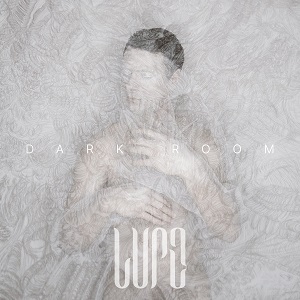 The ‘Dark Room’ is the second solo album by Athens born vocalist Michalis Latousakis and is a collection of eight superb tracks which are full of imagination and intrigue. Ultimately it is music driven by extremely powerful and effective vocal propagations which hypnotically transport you along various emotional pathways.  The music itself has a very classical feel comprising mostly of a series of piano chord progressions, guitar incursions and intermediate choir contributions all of which wrap neatly around the emotive vocal projections. Such combinations of voice and instrumental backing then travel through many intense and quite eerie sequences albeit creating interesting soundscapes that always culminate in extremely dramatic fashion.

In understanding the singing prowess of vocalist ‘Michalis Latousakis’ is, at first, to realise that he, is in himself, a preverbal musical instrument in human form. The variety of his lower and upper register vocal intonations, of which he is capable, is simply astonishing. His output is a strange mixture of that similar to a ‘Pavlov’s Dog’ art-rock stylized music with strains tending towards that which could be considered classical in delivery. Additionally, whether intended or not, there are passages that seem to encompass a deeply religious texture. The vocal effects are further amplified with heavy measures of cleverly integrated overdubbing which expands the overall effects into a preverbal ‘Wall of Sound’

The musical arrangements are all superbly organised with oodles of interesting contributions which are best appreciated with subsequent plays and then suddenly different instrumental flurries and even strings come more to your attention.

Summary: A very different kind of album but which fits neatly into the progressive sphere with a definite nod towards the theatrical rock opera side of the genera.

Guitars in “The Corridor”, “Eyes Cold”, “Torment” were played by Nikitas Kissonas (Methexis) and in “Yet” by James (Mosquito). Clarinet in “Dark Room” was played by Yannis Georgopoulos

Bio: Vocalist, composer and vocal coach Michalis Latousakis, also known as Lupe, was born in 1991 in Athens, Greece. He started his music studies at the age of 19 and studied at the National Conservatory of Athens from 2015 until June 2020, when he took his diploma. Lupe’s first step into the music industry was the formation of Mosquito in 2014, a gothic rock band, with which he released “Colorless” (Demo |2014) and “Interlacing Eternity” (LP | 2017), with the Brazilian label, Deepland Records, and played some successful live shows locally. A year later, Lupe and Mosquito founded the Low Sun gothic festival, in 2019 he created his solo project and released the improvisation album, “Burn”, via Alcyone Records. Apart from his solo project, Lupe has just released the debut EP, “Leyes” (2020) and recently the album “The Diary of Fools” (2021), of his newly formed, neoclassical darkwave duet project, Onism. Currently, the Greek vocalist has just released his second solo album, under the title “Dark Room” (May 2021). Both Lupe’s solo albums are based on improvisation, spontaneity and the pure expression of thoughts and feelings. He stands within the borders of Darkwave & Art Rock‐ however, you’ll sense a lot of other genres as well.