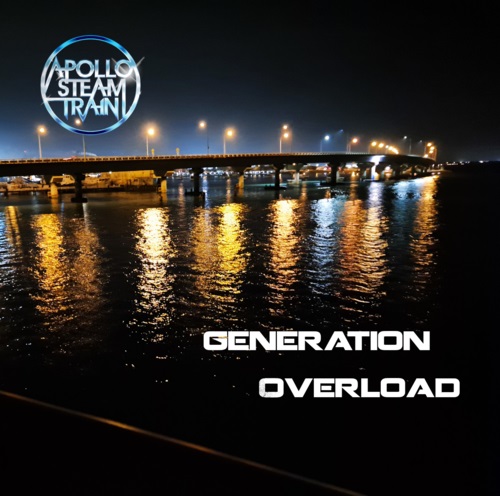 It is safe to say that the debut album from Apollo SteamTrain, which is guitarist/singer/songwriter Brendan McCarthy plus assorted musicians from the Tauranga area, has been quite some time coming. I can count at least 7 singles which have been released from this 11-track album over the last five years, but a project which started in 2014 and took in 3 studios has finally been completed and we should all be grateful for that. Here is a rock album which has influences from power pop, folk, singer/songwriter, and indie, and from bands as diverse as Coldplay, Foo Fighters, Van Morrison, The Knack, {The Feelers}, and {Coridian}. The songs are quite diverse, but all have that infectious melodic groove which means the listener just wants to join in every singalong chorus. In some ways this feels like a collection of hits as opposed to a single album, and that is due not only to the amount of honing and refining that has taken place but also with it being recorded over such a long period, so it has something of a compilation feel with it as opposed to a single slice of time.

The first two songs, Generation Overload and Superstition (Looking In The Mirror), are driving belters, but Swagger is just that, a swaggering blues-based number which has both an early Seventies and late Eighties feel, as if a band like Stray had become far more commercial and up to date. The vocals are just right for the type of music, and the guitar has real edge, so it gives a force to the commerciality. Contrast that with Nothing Stupid which has a wall of acoustic guitars (sounds like some 12-strings at work in the background), and a much slower pace, solid Coldplay with lighters in the air and everyone swaying.

The Song Inside Your Soul is another which is different from the rocky attack, and the introduction sounds as if it could have come from Sgt Pepper. This is a duet with some female vocals, orchestration and a very different vibe, and the singer hangs around for Sail Across The Sky which has a far more folky aspect, yet again with a superb arrangement. The album ends with Barony of Carbery, which laid back, again with an acoustic at its heart and production which is spatial. The end result is an album that is polished, diverse, lush, and so damn enjoyable from start to end. This does not sound like a low-budget debut release but rather it gives the impression of being the latest from a top band. I knew halfway through the very first number that I was going to enjoy this, and that feeling just kept growing throughout. Let’s hope that it is not another 7 years to the next one!