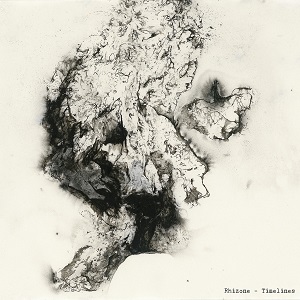 After playing a quick sample I delved straight into the music of Rhizone’s album entitled ‘Timelines’. This was prior to reading the lengthy bio in accompaniment. And so, I sensed that there was some kind of theatrical connection that was driving the music forward.  All the clues for this deduction were there on display, so as to speak. Softly delivered whimsical male and female vocals set within a background of classically structured and hauntingly conveyed piano and cello. No surprise then to later read that “Timelines” is the first of three concept albums that forms the introduction to the rock opera “Metropolis or In Search of the Black Water” The simplicity of the opening musical phrases though soon gives way to far more complex combinations of jazz-infused screeching saxophone and driving guitar but all the while creating space for the dual harmonic storytelling vocal accompaniments to frequently return. The whole affair creates a totally uneasy and edgy cinematic air that literally takes your breath away.

The male and female vocal combinations are perfectly pitched to provide a variety of interesting song arrangements with the male projections presuming the dominant lead role whilst the female voice provides lush counter melodic textures. There are many moments too when the presence of the male voice presumes more of a spoken commentary stylisation and once again bridging the relationship between a rock song presence and the idiom of rock opera. The subject matter of the songs is beset with dreadful happenings associated with a protagonist suffering from schizophrenia and who gradually falls into madness.

The instrumentation, although compositionally full of complex structures, is exceedingly well delivered supporting the vocal aspects flawlessly. Comprising superb lead but not over flashy guitar, driving energetic bass and vast complexity of various drumming patterns steering the direction of the music through an overabundance of ever-changing time signatures. Beautifully embroiled within the structure of the score are many spaces where complete saxophone mayhem is allowed to flourish into a state of complete pandemonium.

It is a totally fascinating album full of atmospheric delights and cinematic grandeur with layer upon layer of absorbing musical and other quite magical happenings.

Rhizone is a progressive rock band from Vienna (Austria). Besides being a band, Rhizone is working on a multimedia art-rock theatre in three acts. Timelines is the 1 st act of Rhizone’s Art-Rock-Theatre “Metropolis or in Search of the Black Water”.

Influences for the album:

Rhizone is a multimedial project consisting of five artists with different backgrounds (jazz & improvisation, literature theory, philosophy) who came together in 2016 to create a postmodern music theater that will be (hopefully) performed on a large scale in concert halls and theaters some day.

The original ideas are reflected in the name Rhizone, which is composed of the philosophical concept rhizome as well as the zone in which these ideas are to take shape. The concept of the rhizome goes back to the philosopher Gilles Deleuze, as well as the psychoanalyst Felix Guattari. They understood it as a hierarchy-less network that has no center – a counter concept to the hierarchically structured concept of knowledge and creation of modernity. This makes it possible to rethink processes of art and institutionalization. Accordingly.the vision of the musical collective Rhizone invokes four artistic dimensions that are to be played upon in order to realize a story about identity and anchoring, emotional occupation and dissolution of the ego. Each of the dimensions functions in a cross-genre understanding that deconstructs and, as it were, incorporates historical art-making processes. To frame it more precisely: In the musical realm, elements of art-rock, progressive-rock, jazz, blues, singer-songwriter, industrial, folk, metal, pop, and classical music are reflected, acquiring their meaning in the course of the narrative of the music-theater piece. In the visual-aesthetic and theatrical field, the musical theater Metropolis or In search of The Black Water (working title), comprising three albums and acts, will offer an art-historical outline from naturalistic and realistic techniques, through expressionism, to surrealism and the theater of the absurd, with these dimensions reflecting the protagonist’s tale of woe in its psychological constitution. The fourth dimension is the linchpin of the project: the literary expression of a postmodern passion that takes place in three acts.

“Timelines” is the first of three concept albums (“Borderlines” and “Lines of flight” will follow the album) and is considered the prelude to the rock opera “Metropolis or In Search of the Black Water” (working title). The 24-song complete work is based on a narrative that describes how a protagonist suffering from schizophrenia gradually falls into madness. In “Timelines” (8 songs), the “timelines” affecting him are depicted by means of a daily routine. Music accompanies the protagonist partly as an intradiegetic component (he encounters a band (4th “Big City Son”) in the narrative and meets a demonstration march (6th “Cut My Throat”) accompanied by hard hip-hop music), but mostly serves to describe the inner states (3rd “God Hell”) and dreams/conflicts (2nd “High Noon”). The “timelines” in the protagonist’s life, which keep intruding into his consciousness as memories and conflicting thoughts, appear as both literary and musical motifs. Thus, although the entire album consists of 8 independent songs, there are musical references of the songs to each other. The first song (1st Sonata: Quit Zero) narratively and musically opens the framework of the story. This culminates in the last song (8th “The Glass Man”), in which the motifs are found again in a changed form as a reflection of the day and finally lead the protagonist to the psychiatric ward (Borderlines).