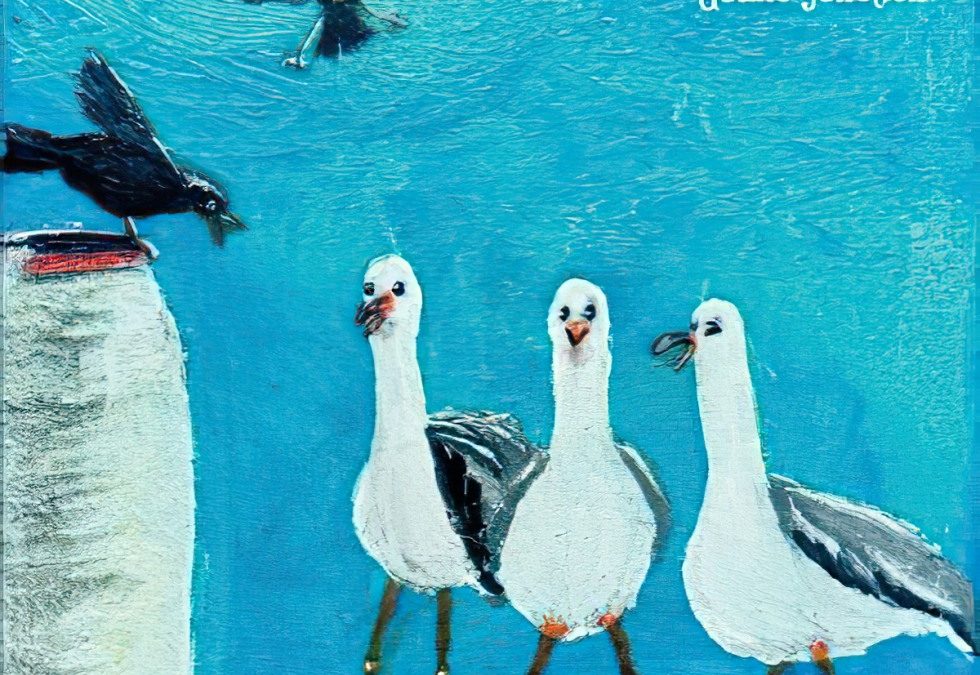 The Gong Farmers are principally two musicians, Mark Graham (vocals, synths and guitar) and Andrew Keeling (classical guitar, piano, organ and flute), along with friends and colleagues. Formed in 2018 following a visit to an Irish Castle, the band name was suggested by reading about the activities of the medieval gong farmers.

As far as the meaning behind the Gong Farmers new album, Andrew Keeling has this to say, “There is little actually visible but, as in ‘Ship of Fools,’ there are allusions to love and loss lying just beneath the surface. The title was conceived by Mark mainly in response to Sue Keeling’s cover painting.” Mark Graham also commented, “The title came in a flash. It’s perfect for a band of disparate and physically distanced musicians bringing all kinds of musical influences and trading as the Gong Farmers.”

“Guano Junction” came from songs and pieces which had lain dormant for some period of time. For example, before leaving the UK for Ireland, Andrew wrote and recorded several small-scale classical guitar loops and piano pieces. Unlike some of his longer classical pieces, these small-scale pieces were difficult to place because, in effect, they were sonic sketches for something unknown. When Mark suggested that they might consider a second album, these pieces were some of the first to be utilized.

Says Andrew, “Mark usually writes the songs and I concentrate on the pieces but, unlike ‘Ship of Fools’, here there was an inversion. Also, we were most fortunate to have input from friends. Alex Che and Cliff Hewitt – both formerly with Modern Eon – did a huge amount to make the album what it is. Noko 440 wrote a splendid string arrangement for ‘Pip, Squeak and Wilfred’ – a song inspired by Mark’s chance discovery of his father’s war medals – and David Jackson, who’d played on ‘Ship of Fools’, provided fine sax playing. My former band colleagues from Thruaglas Darkly, Martin Walker and Brian Taylor, gave their time selflessly and Ricardo Odriozola, Rene Van Commenee and my grandson, Ben Keeling, wrote and played on other pieces. As previously implied, nor is it just Mark and I who are the writers: we encourage all those collaborating at any one time to have a free hand in the writing process.” In the end, the duo had more songs/music than they used.

In closing, Andrew has this to say about the album, “Beyond the general concepts of love and loss, each listener is likely to project their own meaning onto the music. Besides, each song concerns itself with a different subject.” Mark adds, “I’d like to thank listeners for their time and attention and I hope our music rewards repeated listening and finds a place in their hearts.”

Mark is currently writing new songs with a view to recording demos to present to the others for a possible third album.

“Fluid and literate music, conjuring orchestral textures from small-group formats…it’s forging own definition of a strangeland of (the band’s) own design. Scarily impressive, Gong Farmers are heads ahead of most.” (RnR Magazine)