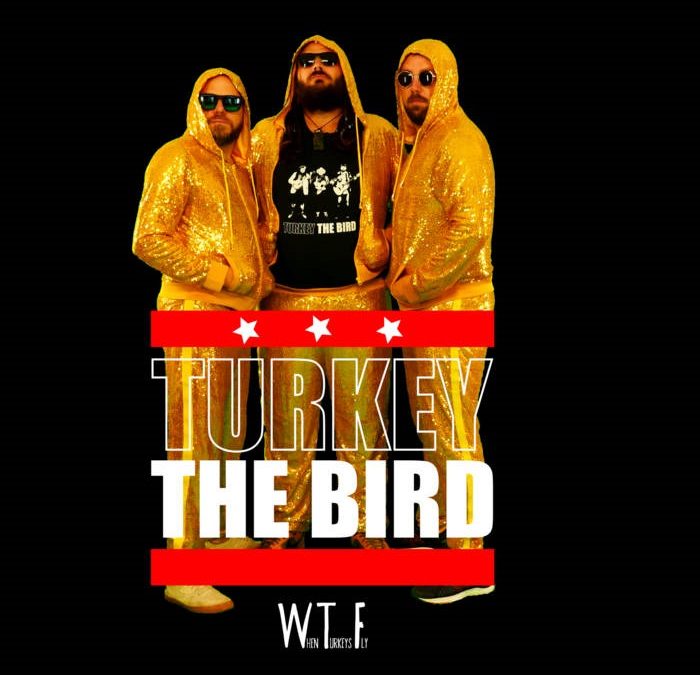 When one sees cover art where the band are wearing clothes which were never in fashion even in the height of disco, combined with a somewhat unusual name then this is either going to be something incredibly special, or something spectacularly bad. However, I had high hopes from this band and when the harmonies hit just 25 seconds into opener Orbit, I knew I was in for a fun time. They liken themselves to a mixture between Simon & Garfunkel and Mumford & Sons, and if we are going to continue with the ampersand obsession then we ought to include Crosby, Stills, Nash & Young, while Cat Stevens also has a place and for NZ references, I would also add {Bond Street Bridge} and {You, Me Everybody}.

{Turkey The Bird} comprise Adrian Whelan (guitar, mandolin, bass), Andre Manella (guitar, bass, stomp box), and Sol Bear Coulton (banjo), and all three of them sing, oh boy do they sing. As may have been gathered from the instrumentation this is mostly an acoustic band, but while most people would call this folk there are also plenty of bluegrass influences, alongside Laurel Canyon singer songwriter and some of the more commercial elements of some of the artists mentioned. The band name may be unusual, and the artwork plain daft, but when it comes to music these guys are deadly serious and the result is songs which are layered and complex, yet also inviting and welcoming. With the lack of percussion there is more room for their instruments to breathe and express themselves as they weave together the tapestries of sound, catching the threads and making them into a glorious whole, and then there are the vocals on top. Here this is more about providing a shining carpet of sound, which lays over the web they have created, somehow never crushing it, but adding to the overall brilliance.

Molly Brown is a drinking song where one can imagine everyone getting more hammered as it progresses, Under A Blue Sky is more upbeat with some lovely riffed mandolin, while Pour Me Another has plaintive electric guitar in the background which threatens to turn it into a slow blues. As with the vast majority of material I receive these days this was sent to me digitally, and I had not paid any attention whatsoever to the song titles (nor had I researched the band beforehand, which is my usual approach). Therefore, the last song on the album took me somewhat by surprise and I just burst out laughing. That song is none other than Kiss, a song which was originally written by Prince but for me will always be one of Tom Jones’s greatest moments. This contains elements from both versions, here combined with some tongue in cheek spoken humour which has far more in common with the album cover than anything else. It also has the banjo very much to the fore, something I don’t remember much from the other versions, strangely, and Bear even gets a solo! If you are going to mess about with a well-known song then you have to be very good indeed and this is plain brilliant.

This is a great album, and I am really looking forward to catching them on the tour which kicks off soon. I will be at Ministry of Folk for the final night in mid-June, but there are plenty of opportunities to see them before then and lovers of great music need to ensure they do not miss out. Until then this album is going to be on repeat, as it is essential.