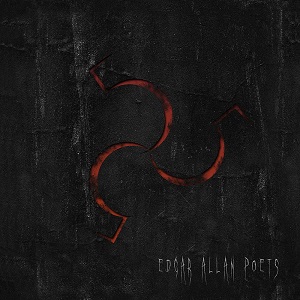 It is such a neat idea for a rock band to proffer their musical output under the influence of the writings of a well-known scribe especially if the resultant music both reflects and captures the mood of those classic writings. For the ‘Edgar Alan Poets Band,’ their musical interpretation of ‘Poe’s hard-edged contemptuous characters are well-executed, being set within their desolate or uncomfortable immoral scenarios. It is not a unique idea though, and they follow firmly in the footsteps of bands such as the American folk psyche band H.P.Lovecraft. It is an idea though, that creates a distinct focal point of interest such, that a subgenre of rock music has come into being appropriately titled ‘Noir Rock’ or  ‘Black Rock’ with comparisons to the music of Alice in Chains, Nirvana, Eyanescense and ‘Black Widow’.

The initial outline ideas for the creation of a rock outfit with music influenced by the short stories of  Edgar Alan Poe and the dark cinematic workings of Alfred Hitchcock were put together by musicians Chris JAariotti and Lop Noor back in 2006. Such creative musical compositions culminated with demonstration tapes that were finalized apparently in a remote cabin, in the Northern Italian Dolomites Mountains. A venue that was almost certainly influential to the spirit of the proposed project and contributory to the very essence of the final product titled “555”. In 2009 in collaboration with Canadian electronic musician and producer ‘Rhys Fulber’ the album was studio recorded.

But just as mysterious as the music itself, is why it was not until 2009 that these demo tapes were finally recorded in a studio and then even more mysterious why the physical album was kept under wraps until 2022. Possibly and only guessing that publication rights might have been subject to debate following the departure of ‘Loop Noor’ to pastures new and the subsequent recruitment of the equally mysterious ‘Shadow’ on drums and keys.

From a musical perspective, the combination of sorrowful lyrics with melodic hooks and tuneful melody is a compositional procedure much utilised by ‘Steely Dan,’ a kind of ‘sweet and sour’ trick that, in a way, defies logic, but in effect produces interesting arrangements, This effect is magnificently amplified by the totally engaging vocal style of, (and I guess it is Chris JAariotti), who’s deeply resonant tones are beautifully executed throughout the entire album. Even though his vocal range is somewhat limited, the delivery is quite perfect managing to create a depth of warm expression that literally carries the music ever forward. The main vocals are in turn supported by a wealth of well-considered vocal overdubs that add much colour and vibrancy to the framework of the music. Instrumentally, supporting such excellent vocals, are combinations of delightfully melodic piano chord structures with other quite classical string orchestrations. And then, throughout the script, bursts of grungy edged guitar continuously explode through the relative sanctity of the general sweet drift of music. Such manoeuvres created as if to purposely disturb such blissful happenings in order to bring purposeful discordance and yet atmospheric creativity.

Summary:  An extremely good album mixing together multitudes of opposing sweet and sour musical elements. An album that is full of keyboard harmony, edgy guitar and excellent but quite unique vocals. There is a marked extent of variance throughout the album with the arrangement providing high levels of interest throughout.

Chris JAariotti from Italy. His family travelled a lot and part of his major locations included South Africa. Algeria and eventually. Los Angeles. California- It was during his life in Italy that the artist began taking his music seriously, playing the guitar and composing.

The Shadow is The Poets’ other major member. From the Northern Lands, the drummer coincidentally lived in Italy for a while before landing in Los Angeles. He was STUDYING MUSIC, GETTING A DEGREE IN PIANO. HE’D ACTUALLY MET CHRIS A’ARIOTTI IN BURBANK. CALIFORNIA- DURING AN OPEN MIKE EVENT. CHRIS .MAR1OTT1 HAD BEEN THROUGH SEVERAL BANDS BEFORE HE AND SHADOW DECIDED TO FORM A GROUP.

While Chris JAariotti and Shadow are the primary members of Edgar Allan Poets, they have also collaborated with many other musicians. With Chris A^ariotti on the vox and guitar, and Shadow handling drums and keys, their deep admiration of Poe’s gothic work, as well as their mutual love of Alfred Hitchcock films, is pretty evident from the album 555