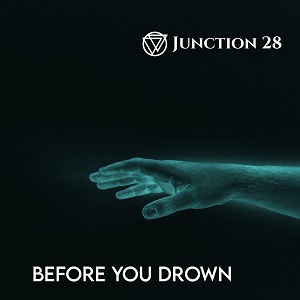 It does not take long when listening to this EP by ‘Junction 28,’ and/or watching their YouTube content to realise that they are a very tight band and that altogether are drenched in superb musical vitality and versatility. It is also very clear that they possess a superb armoury of instrumental prowess and indeed all of the elements needed to traverse through a multitude of different heavy rock styles. There is also a sense of fun about them too with their most able lead singer, Craig Keeling, embarking on little forays of death metal vocalisations. Actually, it is presumed that such incursions are generated in a fun way because Craig is a fantastic vocalist with superb diction and wonderful intonation.

Everything about their composite make-up is extraordinarily well balanced with superb all-around musicianship. Ben Woodward’s energetic and powerful drumming literally propels the pace ever forward. And then acting as a firm foundation holding the framework of the band together and also maintaining percussive unity is the beautifully engineered bass guitar arrangements from bassist and bandleader Kieron Spears AKA Phantom Dick? An air of sophistication enhances the overall feel of the band’s sound with some deft and well-timed synthesiser electronic manipulations from Kit Sylvester. Well-considered lead guitar contributions from Gary Digby adding colour and much panache to the proceedings

Such a collection of superb musicians suggests that the band has been purposely assembled, by Kieron, from the cream of Essex / UK talent rather than its membership being the end result of long term (being in a band) friendships. There is a positive professional air about these guys, certainly, a great future lays ahead as amply showcased on this debut EP. Hopefully, a full album will soon be on the horizon with compositional contributions from all members as they get the opportunity to work and write closer together in the near future

Check out the band’s superb website for a detailed biography, band members and band videos.