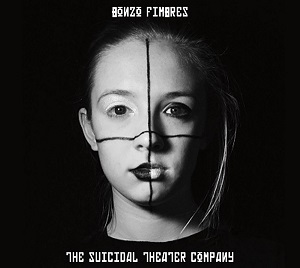 Not since the ‘Hampton Grease Band’s epic album ‘Music to Eat’ has any other recorded material come close to bursting forth and squeezing the brains from out of the top of your head (my head especially). The instrumental virtuosity of guitarist Glen Phillips and the injected weirdness of this 1971 showcasing album for me had remained unmatched and unparalleled to this day. Well, that is until now when the music of ‘Bonzo Fimbres’ found its way into the hallowed halls of the ‘House of Prog Radio’. The music in question is the EP titled ‘The Suicidal Theatre Company.’ Bonzo mentions that the outline framework for these various compositions was actually laid down some twenty years ago but never recorded. The time to do so was never right due to University and a demanding career in IT. The fairly recent addition of his digital home recording studio has allowed Bonzo the time needed to revisit these earlier ideas and experiment accordingly by re-working, reassembling and enhancing these arrangements. Early encouragement from the North Carolina-based progressive rock radio program “Light without Heat” culminated with Benzo’s reworked tracks being aired and much interest generated for his work to be officially released as was the 2019 release titled ‘Combative Life’

In 2022, the second release is titled ‘The Suicidal Theatre Company.  Over the four tracks, the result of his focused studio labours has resulted in a masterpiece of guitar-orientated brilliance ranging from melodic charm to layers of chaotic pandemonium. Music with character and depth reminisces of Zappa and Beefheart, at their most brilliant, and which also incorporates a similar styled off-the-rails weirdness. The entire affair is wholly mesmeric drawing you into the bosom of warm flowing gorgeously melodic sequences and then blasting you into submission with endless forays of profoundly complex riffing. As mentioned earlier the prominence of various guitar combinations provides the focal point for the music. But the outstanding feature of ‘Benzo’s music is his creative flair and his ability to spread this compositional skill over a wide range of different instruments, all of which are integrated seamlessly together. Nice bass lines and well-considered keyboard incursions prevail. Even more intriguing is the fact that Bonzo has never, apart from when he was young, played in any bands. Bonzo states “I am a guitar player of origin and I had the opportunity to study music at the UABC’s university musical workshop here in Mexicali when I was very young and knowing that music theory opens the panorama of other instruments, this fact has encouraged me to play and record with many different instruments.”

Summary: A fantastic collection of tunes that will have you on the edge of your seat both in terms of intense musical delivery and artistic flamboyance. Announced as an EP but at 42mins far exceeding that as a category.