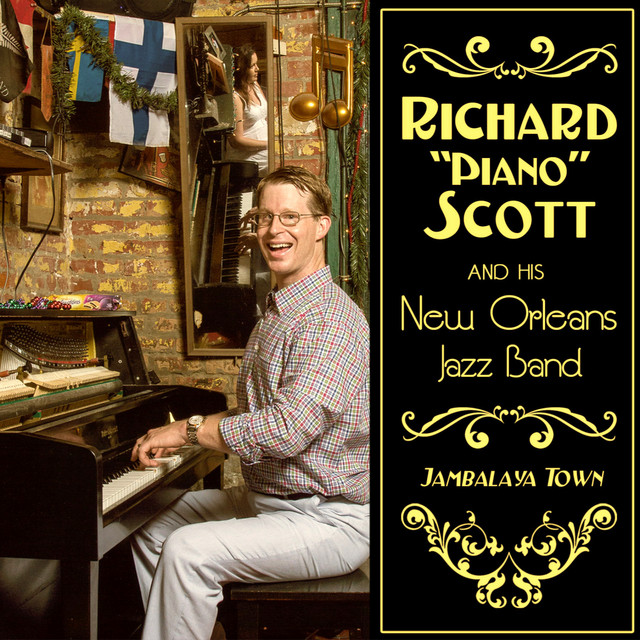 Last year one of my daughters went on a travelling tour of the States with her partner, and of course one of the places they visited was New Orleans. This meant they had to visit some jazz clubs, and at one of them she was incredibly impressed by the playing of Richard “Piano” Scott and decided to buy me a copy of his latest album. Unfortunately, he had sold out of that, but he did have copies available of his third album as bandleader, ‘Jambalaya Town’, which was released in 2014. I am guessing that when he runs his own band he plays piano, hence the nickname, but he is actually a multi-instrumentalist who plays trombone with the Dukes of Dixieland and is also well-known as an accordion player as well as playing banjo and acoustic bass. On this album he provides piano, trombone, Hammond Organ, as well as vocals on five, so he is certainly well rounded. He has then added 16 more instrumentalists and singers, but the album does not sound as if it is a project, just that there is a band in the studio having fun.

Interestingly, it was recorded over a five-year period between 2009 and 2014 but there is a sense of continuity within it as we work through 16 Scott originals which are trad jazz to the core. I grew up listening to this style of music, and I find it both restful and all-encompassing in that by playing it on headphones I feel transported to a different time and place. It is not that this seems like an album nine years old, but rather as if it had come to us from the Fifties, as it is full of that swagger and bounce one expects from the Dixie scene. He has a wonderful touch on piano, loves to bring in some honky tonk when the time is right, and one can imagine these songs being performed in any format, and there are times when he strips it right back and others where he brings in others to fill out the sound. It is classic, direct, and impossible to listen to without a massive smile on the face. I so wish I had been there with my daughter, and if you are in Bourbon Street go check him out as he can still be found there five days a week.