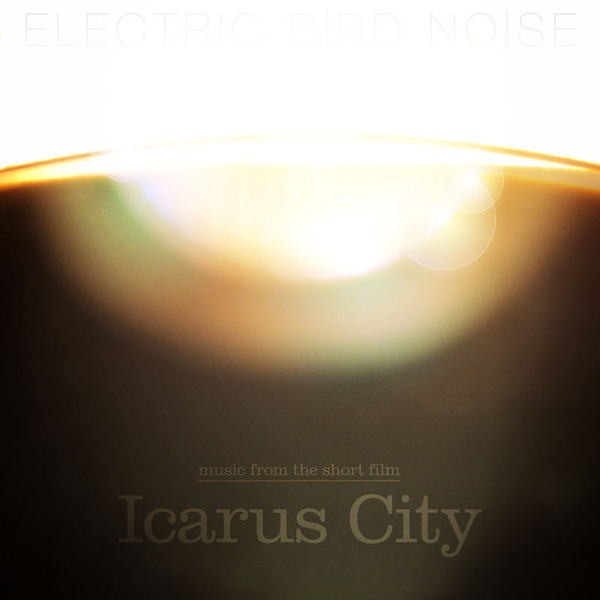 US project ELECTRIC BIRD NOISE is the creative vehicle of one Brian McKenzie, and on numerous productions released since 1997 words like ambient, cinematic and rock have never been far away when describing the material he release. “Music from the Short Film Icarus City” is an EP from 2012 that was released on US label Silber Records as a part of an experimental series of EPs made under the condition 5 songs in 5 minutes.

The premise of this production is described as the soundtrack to a fictional movie summed up in this manner: “Entering the city to save the dying world. Attacked & left for dead. They rise. They fight. They win. They go home.”

And I have to concur that the 5 minutes of music represented here really does come across as a fitting soundscape for just such a movie. Introduction is just that, with a sequencer foundation supplemented with surging dark synth textures and a nervous light toned constant on top in a manner that recalls Tangerine Dream. First Attack has the brooding nervousness only a dark drone supplemented with light toned surging textures can produce, with a nifty placed dramatic effect towards the end. Back to Life is a smooth construction with melodic rhythms and sounds that gives a distinct association to hospital machines. Final Attack/Another Drive Through The City has a more intense atmosphere with it’s starkly contrasting light and dark melodic rhythm effects supplemented by steady beats and surging futuristic sounds. Concluding part Main Theme/The Journey Home/End Credits is a slower, richly layered affair that features the elegant minimalistic theme motif coated in a rich smooth synth texture with slow rhythms and dark, melodic synth bursts that gives this one the vitality needed for a possible theme  track indeed.

A production that should be of interest to sci-fi movie buffs in general I suspect, with fans of artists such as Kraftwerk and Tangerine Dream a more than likely key audience from a musical point of view.