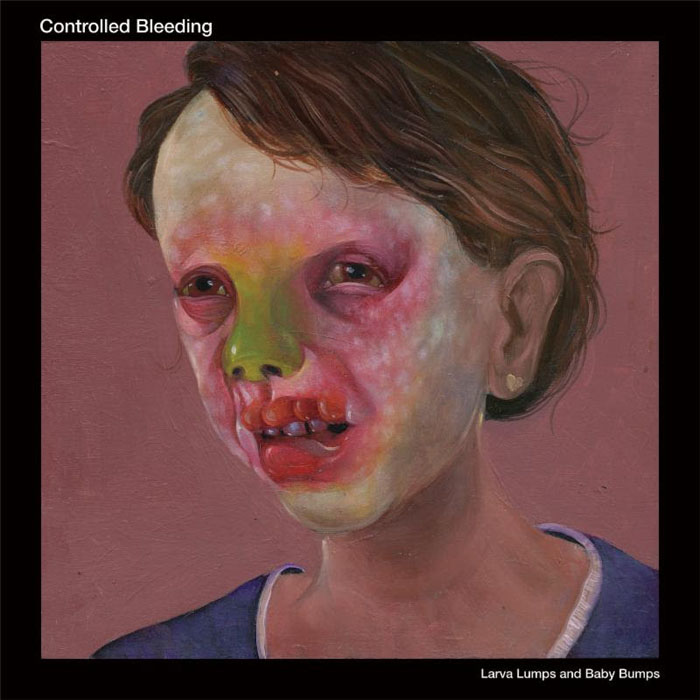 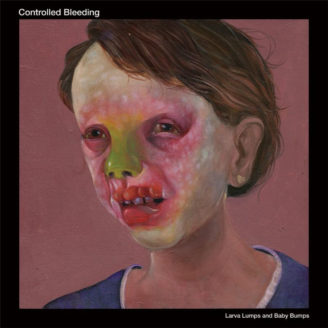 US band CONTROLLED BLEEDING has been a feature of the US music scene for more than three decades, and especially in the first 20 or so years of their existence they were a prolific band on most levels. For the past decade or so they have been relatively quiet though, but they have now marked their return with the double album “Larva Lumps and Baby Bumps”, which was released through Canadian label Artoffact Records in the late summer of 2016.

It is, at times, quite a challenging beast Controlled Bleeding have made themselves here, that’s for sure, and I rather suspect that this is a purebred artist oriented rather than an audience oriented production as such: That this is music the artists involved wanted to create and release rather than music they made with a defined audience in mind.

The first album of this double feature is, from what I understand, the main album. The one containing the music initially planned for this release. And it is a rather eclectic creation, that’s for sure. Opening cut Driving Through Darkness a magnificent blend of some kind of twisted new wave and what may perhaps be described as vintage 70’s psychedelic hard rock. At least those are the main associations I get, without finding such a description to be totally accurate it is the closest I can get. The following cut Carving Song is another splendid example of music, chaotic sounds and noise textures with surging sounds and siren like wails adding a slight touch of harmony and melody to an appealing yet abrasive and challenging example of what one might describe as industrial noise rock. Trawler’s Return plays out pretty much like an early 80’s Hawkwind instrumental, albeit with a tight and frantic delivery rather than the more loose and relatively relaxed landscapes Dave Brock and his various compatriots have had a tendency to explore. The gentler As Evening Fades also gives me associations to Hawkwind, but now the more dreamladen and atmospheric material of that band comes to mind.

Then there’s the elephant in the room. Rather literally in this case, at least as far as I’m concerned, the massive epic The Perks of Being a Perv is a composition that will be divisive. More than 20 minutes of noise textures and chaotic effects ebbing and flowing in a stream of cacophony, this will most likely be a beacon of light for anyone who eagerly seeks out anything labelled noise rock, and a confusing array of sounds for those that can’t understand the allures of non-harmonic, dissonant and chaotic noisescapes. While I’m not alien to the charms of noise, this beast was rather too cumbersome for me to digest.

The second part of this double album is, from what I understand, various recordings from recent studio sessions that the band felt were too good to remain unreleased. These 8 cuts are rather more uniform in style, comes across as perhaps a bit more rough around the edges as well, and most of them sounds like they are the result of improvisations. With two exceptions, the abrasive industrial tinged Swarm and the dub meets 70’s psychedelic rock of Trang’s Song, all of them comes across as cut from the same cloth as well. The remaining six tracks are instrumental affair, and operate within similar landscapes to “Trawler’s Return” on the first part of this double album. Ongoing, wandering affairs that to a lesser or greater degree brings med 80’s Hawkwind to mind, albeit in a firmer and more straight forward manner. Mainly without the use of futuristic sound effects and generally with a much more careful keyboard presence if included. A bonus feature is that a few of those cuts feature a bass sound that brings the late Lemmy to mind, if not in execution then at least in general sound, richness and firmness.

Defining a possible audience for this album is a task that makes me scratch my head just a little bit. While I get many Hawkwind associations throughout, this isn’t a space rock nor a progressive rock album as such, and while there are instances of noise rock and industrial rock present, there’s a lot of music here rather far removed from those genres of music as well. I guess that those with an eclectic taste in music in general is a good place to start, and if you tend to enjoy music of a similar nature to early 80’s Hawkwind and don’t mind the occasional dip into industrial rock territories then chances are good that you’ll find this production enjoyable.