Solitary: The Diseased Heart of Society (2017) 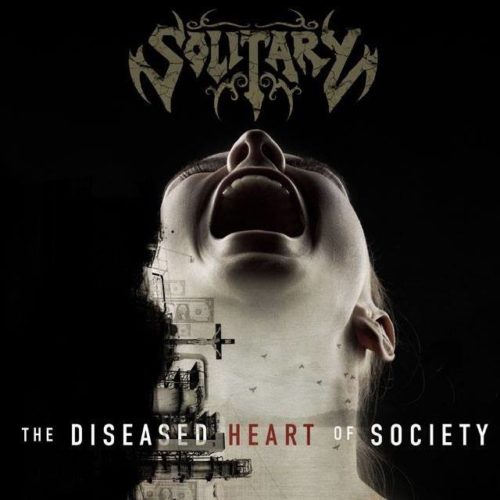 UK band SOLITARY have been around for more than 20 years, but have apparently never truly managed to conquer any grater parts of the metal crowd so far in their existence. Judging from the material on their 2017 album “The Diseased Heart of Society”, set for release in early March through UKEM Records, this is a shame. Because this is a band that, at least as they come across today, have a lot going for them.

Those of us that have been on this planet for a bit can recall the days when Metallica were often referenced as Alcoholica, albeit never to their faces; and when Dave Mustaine and his constantly changing band of musicians and/or drug addicts catered for those whose taste in metal arguably resided in realms of a slightly different and altogether darker nature. Solitary appears to be well aware of the legacy of these bands from that specific era, and use quite a few familiar sounding elements from both bands in their tight, dark and angry thrash metal in 2017.

The opening duo of Blackened Skies/Wait does have something of as Good Mourning/Black Friday feel about it for instance, both in terms of a gentler atmospheric laden intro seguing over to a hard hitting thrash metal composition, but also with the tight, chugging and bouncing riffs serving as a solid foundation and subtle but effective contrast to the slightly twisted, dark toned vocals, complete with something of a snarling, aggressive attitude. Gnarly and occasionally quirky riffs another familiar item on the menu. Provided in a manner that tips a hat or three in the aforementioned direction rather than copying it mind you.

And that is pretty much the story for the rest of this album as well. Some cases of slower paced affairs with a bit more of a groove-laden attitude and Metallica reference to them, other combining features referencing both bands, and occasionally Solitary will also power up into more frantic landscapes, that at least in intensity makes me think about a band like Nuclear Assault, but where the core foundations used are closer to what Metallica may have sounded like in their early days if they were doing amphetamine rather than alcohol.

In essence one might describe this album as an updated version of the classic bay Area thrash metal style I guess. Mix and production are better, the songs a tad more potent and aggressive, but perhaps lacking those killer moments of brilliance that made the aforementioned bands giants of their day and legends of the genre today. As for specifics of this band, the vocals are darker in tone and with perhaps something more of a controlled anger to them, the guitar solo runs are crisp, sharp and flowing to a much greater extent than the bands referenced, and the band are also able and willing to create more sickly sounding, harmony based solo guitar textures when needed. A special mention to the drummer, who adds a nice but subtle tension by way of inventive details and rhythm bursts.

“The Diseased Heart of Society” is a sharp, tight and dark modern take on the classic Bay Area thrash metal sound as I experience it, an album that should appeal to those who still long for the days when Megadeth and Metallica were angry, troubled young men fueling their rage into thrash metal escapades. The guys in Solitary may not be young, I don’t know if they are troubled, but the music they have put together sounds like it could have been made by a bunch of troubled, angry young men, and ones well aware of the vintage thrash metal legacy and history at that.