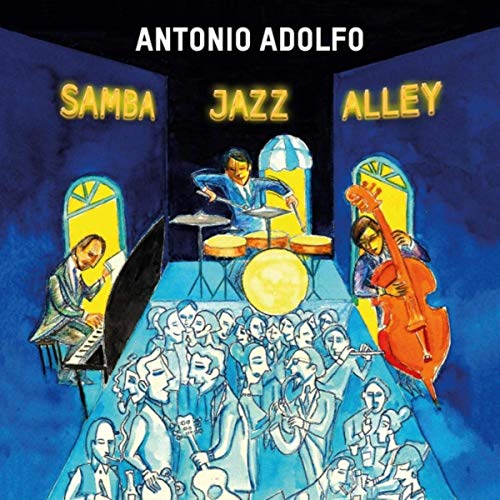 This album is a tribute to the very beginning of Adolfo’s career, when he was a young musician trying to find and discover music. One alley in the heart of Rio’s storied Copacabana neighbourhood had four nightclubs that served as a breeding ground for the city’s up-and-coming instrumentalists and singers during the heyday of bossa nova. The alley was termed Beco das Garrafas (Bottles Alley) because residents of neighbouring apartments would shower the tiny space with beer bottles to protest the early morning racket produced by Bohemian revellers and impromptu jam sessions. As he was too young to enter the clubs Adolfo used to stand in the alley and listen to the music being played, only able to get in when he formed his own band, 3D, at the age of 17 and was given special dispensation even though the legal age for entering was 21.

This was 1964, and the mix of bossa nova and jazz was at its height, and it wasn’t long before Adolfo stopped studying law and instead started on a long career as a jazz pianist and band leader. Here he has brought together a band which of course features a heavy-duty brass section and they go about their duties in exactly the manner one would expect from an album with this title, mixing samba and jazz into something which is fresh, exciting and very Brazilian. Needless to say they are as tight as only a really great jazz band can be, with a drummer who delights in adding his own touches and styles throughout: he is definitely not one to sit at the back and let the rest of the band take all the glory, and this driving element is at times quite at odds with the languorous style in front of him, yet it all blends and mixes well together. This is music with real heart, emotion and soul, and a passion which makes it easy to listen to time and again, always with a smile on the face. Superb.