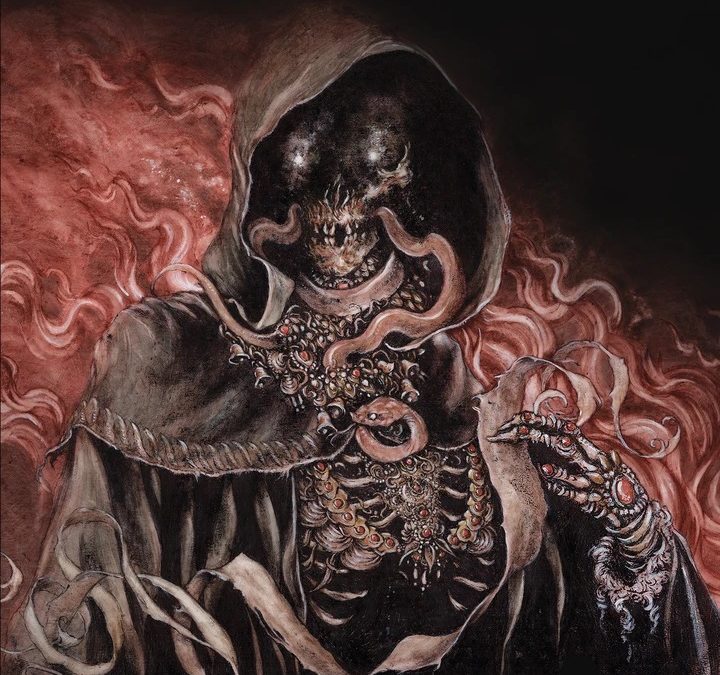 Since first coming across Cadabra Records and their releases a few years ago, I have continually been intrigued and drawn to their albums. Here we see them visit H.P Lovecraft again, but this time it is not to visit a short story but instead eight sonnets from the ‘Fungi from Yuggoth’ collection, which was written between 27 December 1929 – 4 January 1930. Here Andrew Leman is the reader, while well-known film composer Fabio Frizzi (Kill Bill, The Beyond, The City Of The Living Dead), here provides acoustic guitar as the supporting music. He decided to approach the project by creating his own “guitar notturnos” based in the traditional Nocturnes – the “night music” – of Italy. Each song was composed to the mood and tone of the chosen poem, which then Leman read afterward to the rhythm of the music.

This has only been released in limited-edition high-quality vinyl, with the 8 poems and music on one side, and then a repeat of just the music on the other. Normally I feel these albums are perfect in that the music accompanies the words, but somehow this one is the other way around. Even on the side which features speaking, I found my ears drawn more to the wonderful classic acoustic guitar and the resonance of the strings as opposed to the words. I actually found it quite hard to concentrate, whereas normally I am drawn into that deep dark world, but on this album, it is the music which takes centre stage. There is a darkness within but putting that aside I found there were sections very reminiscent of Hackett’s classical works as well as the wonderful Anthony Phillips.

I have yet to come across a Cadabra release I didn’t enjoy, but this time it is definitely more about the music than the text which should be taking centre stage. Yet another compelling, sinister and ominous release from this wonderful label.