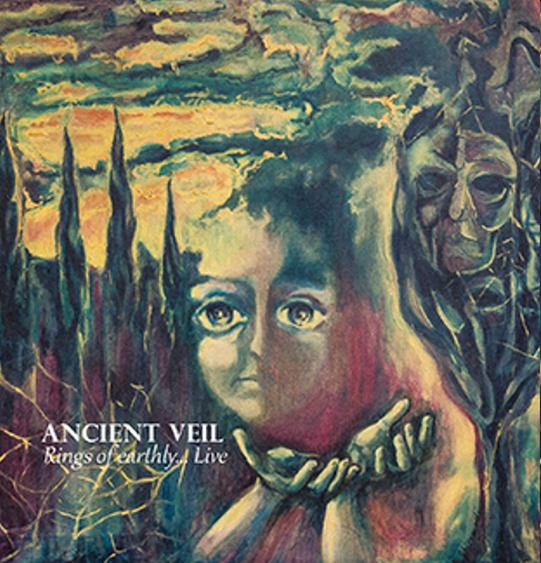 The roots for the music on this album go way back to1985 when musicians Alessandro Serri and Edmondo Romano formed the band ‘Eris Pluvia’ where they expanded on the concept of integrating ancient and modern musical sounds with an array of different instruments such as, flute, soprano sax, acoustic guitar and violin etc and which resulted in a form of progressive rock with a very Baroque / folk-tinged sound. This, as an ideal, came to fruition in 1991 when they composed and recorded the symphonic rock album “Rings of earthly light” an album that subsequently received much critical worldwide acclaim. Fast-forwarding to 2017 and live at the ‘La Claque’ venue in Genoa the core of the band now known as ‘Ancient Veil’ performed a concert comprising output from their various past /current musical pieces and in which was included a suite of tracks from ‘Rings of Earthly Light’. It is this concert in its entirety which is the subject of the review that follows..

Here on this album is over an hours’ worth of superbly crafted, beautifully constructed and extremely melodic progressive rock music. The whole concert as a recorded event is inundated with moments of warmth and serenity and you really can feel the passion emanating from the individual musicians as they astound you with their instrumental artistry. Listening to the music, especially track seven ‘Rings of Earthly Light’, produces and induces within you a complete state of utter relaxation and an overall sensation of being at ease with the world.  Certainly and no doubt it is music for setting yourself free to completely unwind allowing the delicate myriads of sound to wash over and around you saturating your whole being with the magical power of perfect harmonic composition. At times reaching classic proportions the combinations of piano, oboe, and flute, with lead electric and acoustic guitar are indeed a joyful mixture of audio enchantments and in what’s more so expertly played. Incorporating elements of jazz, rock and Baroque sensibilities all of which are delivered with the skill of musicians at the top of their game. There are oodles of subtle time changes and shifts of musical direction in the construction of the music but this tends to follow instances where the lead instrument at the time whether it be guitar or woodwind comes gently to the fore.

There is nothing noisy, strained or over-exaggerated about any of the vocal contributions because they are all delivered with much style in a soft, gentle and tuneful manner. Possibly the highlight of all the other highlights is the brief guest appearance of Valeria Caucino whose glorious voice borders on magical.

Unbelievably too there was nothing over exaggerated about the audience who, purely according to the sound on the album, seemed strangely muted, perhaps it was due to the mixing desk, bit of a shame as the performance deserved thunderous applause.

02 Dance around my slow time

03 The dance of the elves

04 Creatures of the lake

Following her in a fantasy lake

I re emerged ancient knight

09 In the rising mist

Info Taken From Press Release: The live was recorded during two concerts made in 2017 in the beautiful space of “La Claque” of Genoa which occurred on May 12 during the long live which has seen protagonists Valeria Caucino on “Sell my feelings” (voiced by “Rings of earthly light “) and Finisterre participates in the song” In the rising mist “in the guise of Fabio Zuffanti and Macintyre at November 11 in acoustic guitars and the training completed by the presence of Marco Garcia to the oboe.