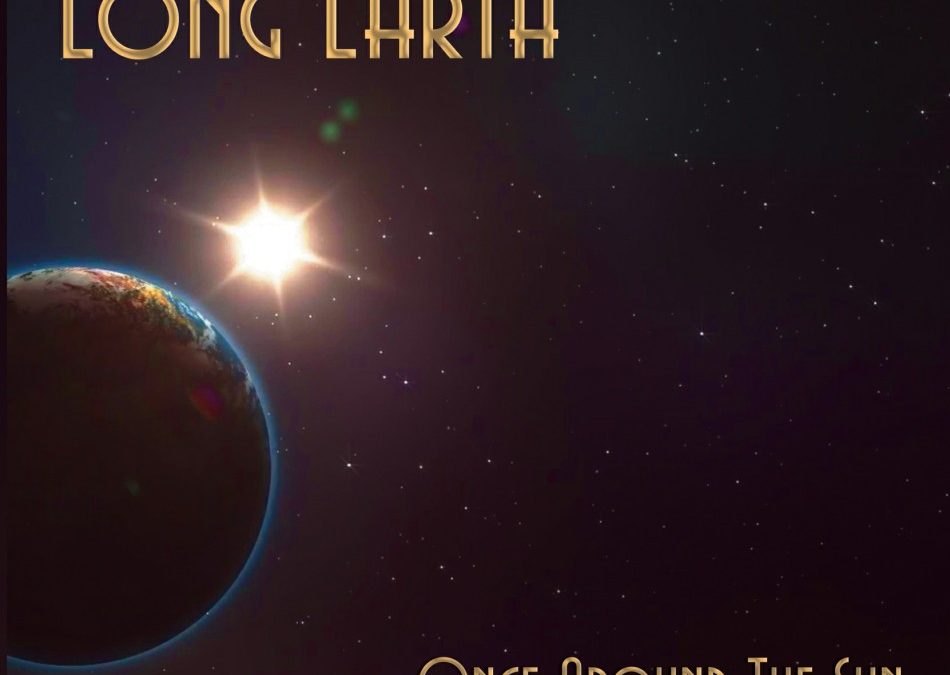 Having a true fascination for the way progressive rock bands meet and merge together I was completely absorbed by the story or rather the sequences of events behind the formation of ‘Long Earth.’ A new and exciting Scottish band although one with Glaswegian musical tentacles extending way back to the eighties through a series of different bands and associations. I first came into contact with the keyboard player ‘Mike Baxter’ through ‘Facebook’ who introduced me to their current album ’Once Around The Sun’ and I was immediately and totally hooked. An album of subtle and quite beautiful moving lyrical content with equally thoughtful and well-crafted musical arrangements.

From a musical perspective, the band truly capture the magic of the early seventies when British bands shifted up a gear from pop-orientated psychedelia to music of true worth. But not only have ‘Long Earth’ maintained such a spirit of that age they have totally exceeded such stylisation with a sharp modern edge. Immersed throughout the nine tracks we are treated to 66mins of a well-crafted and superbly arranged music from a tightly knitted well-ordered percussive department adorned atop with deft keyboard and guitar interactions. Such lead interactions forming a series of joyfully extended melodic sequences that burst to the forefront of their compositions. The depth of melodious splendour throughout this album is quite amazing as the music is drenched to the brim with saccharine sweet time shifts galore and instrumental splendour. In fact all of the ingredients necessary to facilitate an album of intense progressive interest throughout.

Certainly too and a real cherry on top of the cake are the extremely impressive vocal contributions, not only delivered with style and perfect intonation but also with clarity and conviction. The lyrics are very meaningful and, without doubt, draw parallels with the real experiences and emotions of life common to us all.  (Incidentally, the band thought it would be interesting to ask Martin for a short description of the background to the lyrics for ‘Once Around The Sun’ ) This he has written on their website which is well worth checking out (see above)

Summary: A top-rated album that is sure to please all aficionados of well-constructed progressive rock including those who would normally favour a more metal infused offering. This album is a pleasing example of how music can be layered and organised in the shape of an exquisite symphonic styled rock with clever lyrics and strong purposeful vocals. It is clear too that these guys are thoroughly enjoying their second stab within a tight band environment playing and developing music that they love and which is so pleasing for us to absorb and enjoy.

From The Press Pack.Long Earth is a prog rock band from Scotland, four decades in the making – a core of whom had played together decades earlier in Scottish prog stalwarts Abel Ganz, and most of whom played at the same Glasgow Festival in the 80s…but in 3 different bands In 2017 Long Earth released their Debut album The Source, popular with prog fans, DJs and rock writers alike, and began building a local audience at their gigs around Glasgow. The Source was a serious statement of intent, showcasing the instrumental and songwriting prowess of the band. However, their identity was not fully formed until the arrival of Martin as the band’s new vocalist in 2018 during the writing sessions for the second album, the album that was to become Once Around The Sun. Personnel; Mike Baxter (Keyboards) a feature of the vibrant Glasgow music scene since the late 70s, notably with Shoot The Moon, Glas Clas and Identity Crisis among others. It was during Mike’s time with Identity Crisis that he played with Gordon, recording in Edinburgh. Gordon Mackie (Bass) has a background in music spanning more than 40 years. During the ’80’s he provided the bottom end and drive for Cry Wolf and seminal Glasgow proggers Abel Ganz. Gordon recorded “Gullible’s Travels” with Ganz and played a lot of memorable gigs throughout Scotland including the Kelvingrove Festival. Moving into the ’90’s, following a move to Edinburgh, a chance meeting in a supermarket saw Gordon hooking up with Mike in Identity Crisis. Ken Weir (Drums & Percussion was the original drummer in Abel Ganz recording “Gratuitous Flash” and “Gullible’s Travels” along with Hew Montgomery and Gordon Mackie – the band also featuring Martin Haggarty for a while. Thirty years later, the four of them would work together again in Long Earth. Ken’s sister Connie is also responsible for Long Earth’s artwork. Renaldo McKim (Guitar) joined Long Earth during the latter stages of the recording of debut “The Source” . Renaldo has played with many bands over the years, latterly with Suicide Underground and now Long Earth.Martin Haggarty (Vocals) formed Glasgow Indie outfit Lost Weekends in 1983, before joining Abel Ganz for a spell. Martin then joined short-lived proggers Masque in 1986, before forming Field of Vision in 1987. After 4 years and a few singles, FoV took a hiatus that lasted until 2013 when the core members reformed, releasing 2015’s Viccissitudes of Life, and 2016 single The Dagger. Field of Vision continue to write and record as a studio[1]only project, but with a desire to return to live music and a surplus of musical ideas, the opportunity to join some former bandmates in Long Earth was too good to resist. The final cog in the wheel is Hew Montgomery, (Abel Ganz / Comedy Of Errors / Grand Tour) who has been a friend and confidante to Long Earth, and co-produced The Source and Once Around the Sun with the band. In March 2020, the album Once Around the Sun was released on CD and Download to critical acclaim. Widely regarded as a significant step up from its predecessor, it has received regular worldwide airplay throughout the year, and features heavily in many DJs and listeners’ “album of the year” lists. The band had been booked to play festivals around the UK in 2020 and 21, and hope many of these will be a bl e to resume in the coming months. Long Earth are now writing material for their third album.

And finally An extra -Mike told me , I am the keyboards player of Long Earth! Either Renaldo the guitarist or I come up with the original music then Martin does the lyrics and the other two then chip in. Gordon approached me out of the blue to form a new band in late 2015 I hadn’t seen him or played since the early 90s due to work commitments. He had the drummer Ken, and I had the time so I came up with the name and Renaldo joined in September 2016 . We recorded The Source in 2016/2017 in another ex-school pal and neighbour Hew Montgomery’s (another founder of Abel Ganz and of Grand Tour music), home studio with a mix of old and new material with the original singer Neil younger step brother of Gordon. so Martin joined in early 2018, so Once Around the Sun is really way more representative of us, but we play some of The Source live The Source was well received and sold enough CDs to fund a more professional final recording and Mastering in other pro studios for OATS, between November 2019 and March 2020, with release on 23 March 2020, er, UK lockdown day. So never got as much promotion as we had hoped and we still do not have a manager or promoter, which we need for festivals in the future. So to date we have promoted ourselves.