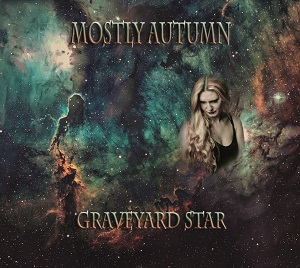 Rating 90/100
Imagine the complex atmospheres of ‘Pink Floyd’ interspersed with the dramatic intensity of ‘Magna Carter’ wrapped with the medieval Celtic flavourings of ‘Blackmores Knight’ and you will have an understanding of the overall impact that ‘Mostly Autumn’ are able to generate with their lush musical deliverance. Certainly too with their latest offering “Graveyard Star” they embark upon a fairly complicated mixture of what could be described as popular musical theatre presented in the form of a series of miniature symphonies. But the collection of tunes on this album extend far more and beyond such a simple formula taking you at every junction on different unexpected routes. For example, what starts off as an up-tempo  60s bass guitar enterprise turns magically into a full-blown Celtic rock enterprise with beautifully executed female vocals and a full-blown sweeping fiddle dominating the lead instrumental role. The entire album is full of such surprises and is a  preverbal mixing pot of musical snippets which suddenly come to the fore, exquisite slices of ‘Pink Floyd’ guitar and organ tucked in amongst powerful crescendos of female vocal deliveries.

There are simply so many multitudes of atmospheric soundscapes built into the various scores as the music weaves continuous patterns subtly changing the melodic direction of the music through many deft pathways for each individual song. To explain this statement it is only when you engage with the music itself that you realise that practically every song metamorphoses through several different stages but does so in such a way that that you are unaware that the framework of the song has been transformed. Very cleverly too the instrumental contributions, especially of guitar, gradually build up to provide interesting symphonic themes to compliment the superb vocals.

Olivia Sparnenn’s clear crystal vocals are faultless and are a joy to behold whilst the odd duet involving her and Bryan Josh form a magical combination.

Summary:  Whilst this beautiful album, in actuality comprises twelve tunes, it is in effect a bumper 74 minutes of continuous spellbinding music which is packed to the brim with twists and turns at every corner. Dabbling with combinations of folk, progressive rock and musical theatre it is an album full of enterprise, wonderful vocal and instrumental skills bursting within a framework of imaginative compositional splendour.