Aaron English- All The Water of this World (2021 Reissue) 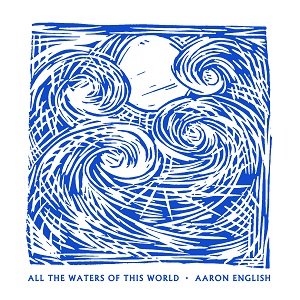 “All The Water of this World” by Aaron English is a studio album that seemingly escaped sufficient media attention when it was first released back in 2002 but fortunately it is now subject for a timely release twenty years on. It is an album rich in cool musical content with lavish instrumental diversity built up upon frameworks of intriguing percussive arrangements. An album which and when presented to a wider audience of knowledgeable (Progressive and other) rock fans is sure to realise far more recognition for the deft arrangements and instrumental prowess.   Lavish arrangements which in turn are generously flavoured with multitudes of male and female vocal effects and saturated with other countless sound embellishments.

Maybe the apparent averseness to this splendid album from a commercial aspect could be that ‘Aaron English’ is generally considered to be a country-styled vocalist and ‘piano man. The progressive aspects of this album therefore not being fully realised and somehow dismissed at the retail end of the music industry.  Certainly, the country side of his output features here and there throughout the eleven track score, more particularly ‘All the Waters of The World’ and ‘The Flower of Lebanon’.  But this welcome re-release is an interesting collection of songs that reflect a true diversity of Aaron’s multiple talents and overwhelming compositional skills. The album is in fact crammed with unique musical arrangements and is in effect an epic musical journey bringing on-board and integrating melodious flavours from many corners of the world into a guitar packed Western-styled framework.

Whilst Aaron’s sparkling and flowing piano accompaniments do not exactly monopolise the led instrumental role, they more so, act as a kind of engine room driving the music ever forward and in doing so give space for the violin, and other stringed instrumentation to hold sway. In themselves, the scores are peppered with a vast array of other musical treats including Eastern flavours of a hurdy-gurdy, bouzouki interspersed with accordion and cello. These instrumental flavours are further expanded with some glorious well-considered guitar leads.

The term ‘shape shifter’ comes to mind as a way of describing the various fusions of genera that abound the makeup of this all-embracing album of various stylisations. There is however no disputing the country intonation of Aaron’s vocals as the music flows between the various styles of adventurous rock versus audacious country flavours.

Summary: A beautifully expressive album full of musical diversity and packed with interest throughout, especially from a lyrical point of view together with the sheer variety of traditional instruments, from around the world, that feature throughout the music.   It is also a project that will remain forever within easy reach of my CD player as an album for which I will never tire.