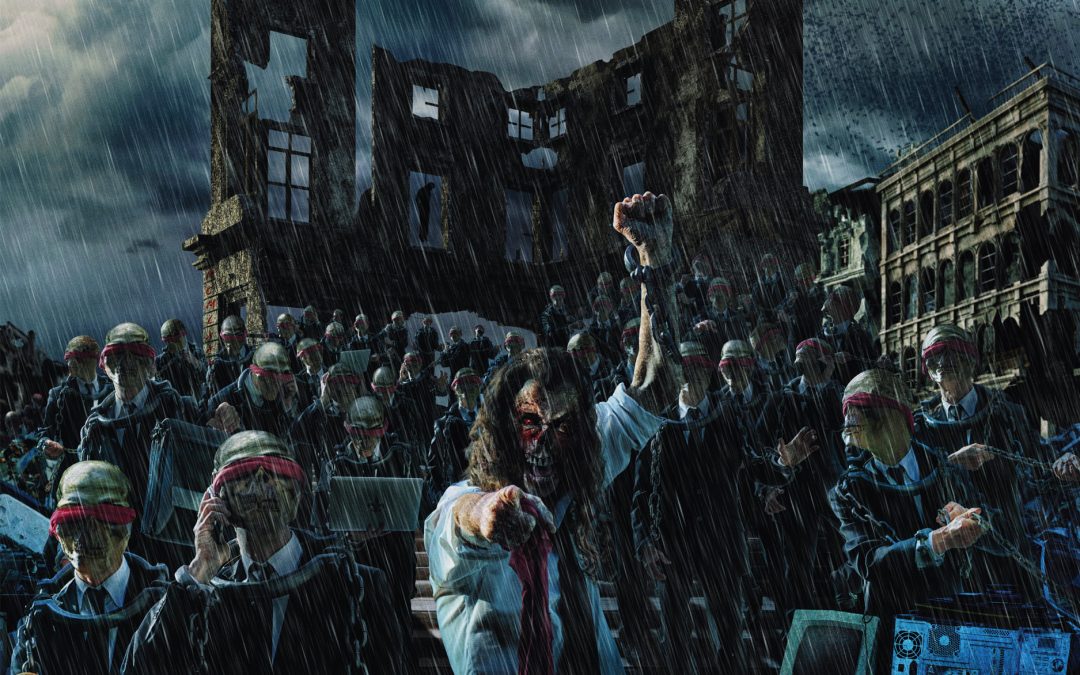 Sam Sheppard is probably best thought of as the powering drummer for the likes of {8 Foot Sativa} and {Sinate}, and now he is back with his latest project, Imperial Slave. This time around, as well as providing drums on the album, he is also the lead singer and main songwriter. He has been joined by Isaac Lundy (guitar), Anthony Hati (guitar) and Achilles Manley (bass) while Matt Wright will be providing drums onstage so that Sam can concentrate on his new role as frontman. Even before I started listening to this, I knew we were in for something epic, just from seeing the cover design from Barny Bewick at Indium Design ({Alien Weaponry}, {Devilskin}, {Dave Dobbyn}). The artwork took me back in time, and so does the music, as this could have come straight out of the Eighties.

What we have here is very clean thrash/melodic death crossover, where the production allows for clear separation between the instruments while also allowing them to come at the listener like a runaway freight train. There is quite a contrast between Sam’s gruff vocals and the guitars which have little in the way of effects, but rather rely on fast picking and powerful interplay. Sam has been pounding up a storm with various very heavy bands over the years, and his approach reminds me of Gene Hoglan in that the guitarists must keep up with the intricacies of what is happening behind the kit, where there is a great deal of finesse as well as plenty of double kicks when the time is right. Achilles allows himself to provide some powering bass lines, not only sitting behind the guitars to add additional depth to their approach but also putting in his own melodies which can be in stark contrast (An Gorta Mor has some especially fine examples of this). Then we have the twin guitar attack of Isaac and Anthony who come at us like a mix of Testament and Exodus, with hints of Mustaine but also bringing in elements of Cannibal Corpse when the time is right, but always with a very clean style. Fear and Hate shows them switching things around, throwing it all in a melting pot and seeing what comes out the other side. The band provides a huge contrast to the rough and raw vocals, and the result is incredibly powerful.

Here we have a band who have produced a debut which sounds as it has come out of an American studio, from a group signed to a label such as Nuclear Blast or Napalm, when in reality it was recorded at The Stomach in Palmerston North with Sam producing and Nigel Mauchline mixing and mastering and is an independent release. This really does not seem like a local Kiwi band, but one which is destined for the international stage and plenty of touring. I can certainly see these guys hitting the European festival circuit when they are able to get over, but until then I would be satisfied with seeing these guys play in Auckland if we ever get out of lockdown, as if the album is as powerful as this what on earth are they going to be like in concert? Definitely one for metalheads to discover.