Prefers To Hide In the Dark: Boundless Energy (2022) 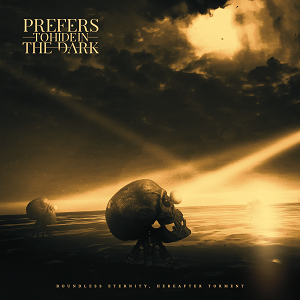 Every now and then along comes an album that grabs your attention but mysteriously and for whatever reason, is not clear at the exact time of listening. ‘Boundless Energy’ is one such album.  Initially, it does not pull you into its bosom with a warm melodic memorable tune, there are no apparent clever hooks or seemingly no deft instrumental interplay. But, after hitting the play button a couple of times you gradually become hooked, in fact, transfixed and well and truly caught within its musical spell as myriads’ of hypnotic pulses gradually reign down upon you and engage your brain. And then as the music continues to flow you become helpless in the grip of the rhythmic pulses as you fully succumb to the musical vitality being released into your very soul.

Certainly, ‘Boundless Energy’, is not first time listening material. It is also not music to dance to or easy to sing along with. Therefore if at first play, the temptation is to move quickly on for something else to grace your turntable, then HALT! As you will be seriously missing out because this album is something very special. All you need to do is to hold on in there and wait for the magic to happen.

There are many elements about this album with which to engage and then, after repeated spins, more and more interesting aspects drift to the forefront of your attention. What initially might seem to be just a series of polyphonic harmonic murmurings do unbelievably metamorphosize into sequences of the utmost musical clarity and beauty.

In such a clever fashion the vocal contributions are cleverly interwoven into the framework of the music. But not so in the same format of a regular song because they actually meld into the overall body of the entire musical score. The lyrical significances, attributing to the conceptual angle of the album, regarding life’s various torments are, to a degree, lost on me. But little does it matter because the beauty of the album centres firmly on the direction of the actual music and vocal adornments which in every respect contribute in the same way as the resultant output from the musical instruments themselves. The impact of these vocal contributions is then exacerbated with a whole host of subtle choral combinations as the voices merge together in two and three-part harmonic progressions. At times these vocal progressions create an almost spiritual feel.

The project comprises four longish tracks each of which contains a multitude of percussive variations. Throughout the entire score are multitudes of fascinating bass lines are transmitted with a distinctly tuneful edge. Load and sometimes brash incessant drumming projected with military-style procession drive everything forward. Mixtures of strumming and fingerpicking guitar colour the music and especially in track two the addition of solitary trumpet together with wind chime castanets give a momentary Spanish air.

Summary: An interesting well-constructed album played with oodles of energy together with many moments of subtle inspirations.

This is Shelby LOGAN WARNE (KYROS) who has done production work with a remarkable mastery in all aspects. She has mastered the art of PTHITD.

From The Web: ‘Prefers to Hide’ in the Dark is a progressive rock band founded in 2021, built around large-scale concept pieces, operatic vocal harmony, and hypnotic rhythm. The band straddles both contemporary prog, through heavy guitars and complex polyrhythm, and earlier psychedelic rock with extended jamming and experimental improvisation