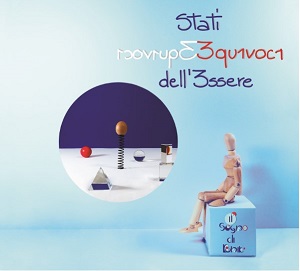 Il Sogno Di Rubik (The Rubik’s Dream). as a project is the vehicle for the combined talents of multi-instrumentalist ‘Francesco Festinante’ and vocalist Cosimo D’Elia but more importantly, the product integrates together twenty years of friendship, togetherness and harmonic understanding. Their catalyst for this musical union was the fact that Francesco had accumulated a massive backlog of unfinished music recordings mostly on a hard drive. Such recordings needed finalisation, especially in the direction, perception and understanding of a great lyricist and vocal exponent. Their first project together in 2020 titled “Tentacles and Miracles’ was sung in English and received rave reviews. Moving on to 2022 ‘Stati Equivoci dell’Esere’, which literally translates to ‘Equivocal States of the Age’ is the second album from the Italian Band ‘Il Sogno Di Rubik’ but unlike its 2020 predecessor, titled “Tentacles and Miracles” it is entirely sung in the beautiful Italian language.

Following In the true tradition of classical Italian progressive rock music from the past ‘Il Sogno Di Rubil’ music combines the normal trademarks of harmonic fluidity with many amalgamations of complex time changes and sudden modulations of pace. Especially noticeable too are the multitudes of counter harmonies engineered within the stream of busy bass lines. In fact, after several listens the complexities created within the overall framework of the music reveal themselves at each and every junction of the script. Edgy guitar for example wrapped and extending forth from within layers of feudal style music. In fact, the whole affair offers up surprise after surprise as the music shifts along with purpose and resolve. The full extent of ideas incorporated over the six-track 71-minute span is quite incredible, this is with respect to both the musical arrangements and the range of instruments utilised within the score. The lead guitar certainly takes a bow as being the foremost instrument from the pack, but, in which case, does so in outbursts of self-proclamation rather than in tandem with other instruments. There is of course a huge keyboard contribution, both in terms of providing melodic fills and also vigorous chord progressions. Typically, the musical arrangements, in true grandiose Italian style, slowly form together to create a series of mini crescendos before building up towards the final climax.

The vocals are delivered with impeccable style, altogether beautifully resonant and very stylish creating a wonderful harmonic link to the complexities of the music. There are too many additional and excellent choral couplings providing a polished edge to the progression of the music in its entirety.

Summary: A very listenable album with six lengthy tracks full of good music and excellent vocals (Italian) that gets better with successive plays.

‘The Rubik’s Dream: Equivocal States of the Ages’

From the theatrical, narrative and musically colourful style, the name of the band was born and the debut album which seems to be the perfect answer to a rather original question: what could be the soundtrack of the dreams of the inventor of the mythical cube?

The disc, in fact, tells of a dreamlike journey, undertaken by a group of people, within a magical labyrinth governed by Tentaclenight. Dreamlike, that is, concerning the dream or dreams, or that which occurs, which manifests itself in the dream.

Activities, interpretations, visions, images, scenes, and hallucinations, which have characteristics similar to those of the dream. Unreal, rarefied, fantastic in the atmosphere, in the exaltations, in the delusions, in the poetry, in the flavours of their twilight state.

The mysterious entity Tentaclenight will put the protagonists to the test through singular experiences in unusual places, hindering them in the search for the way out of the labyrinth, which leads to the well of miracles.

The extraordinary adventure, with all its unpredictable difficulties, will reveal the weaknesses, fears, false beliefs and strengths of each of them, until reaching the climax of history with the realization that the role of antagonist played by Tentaclenight, it is ultimately a necessary evil, as part of a much larger design.