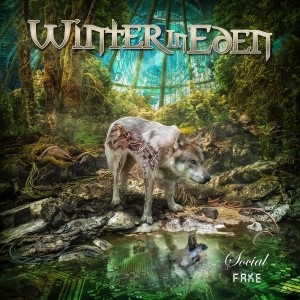 Northern Symphonic Rock ensemble, Winter in Eden, has released its new studio album Social Fake to an immense reception from fans and critics alike.  The band crafted the album over a long period, including during lockdown, but the end result takes their music to a new level.

Contains all-new material that builds and further refines the unique style that is Winter in Eden, from delightful symphonic instrumentals to crunching aggressive rock.  With compelling vocals, muscular riffs, memorable hooks, and swirling keyboards coupled with pounding bass and thunderous drums; the result is powerful, modern and perfectly balanced.

Social Fake is the band’s fourth album and features a line-up of Vicky Johnson, Steve Johnson, Steve Hauxwell, Benji Lynch and Ian Heddle.  Its release coincides with the launch of the band’s new website store  with Townsend Music: https://townsendmusic.store/products/artist/Winter+In+Eden

Lead singer Vicky Johnson said of the release: “‘Social Fake’ is a very special album for us. We poured our blood, sweat and tears into this project and the results make me feel incredibly proud. I love every single song on this album.  The sound has evolved but it is still Winter In Eden at its best.  We can’t wait for everyone to hear it.”

A video for the title track can be seen here: https://www.youtube.com/watch?v=1zTkYwnyZnY