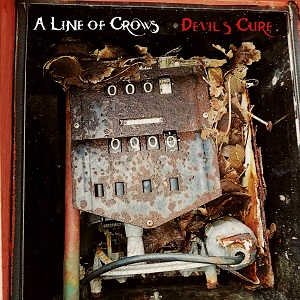 Music | A Line of Crows (bandcamp.com)

The collective noun for ‘A Line of Crows’ might be a ‘Murder’. But the sheer essence of the music from ‘A Line of Crows’, and in particular their album ‘Devils Cure’, is far moved from anything that could be described as murderous. In fact, the sheer brilliance of their music elevates what could be described as country and blues flavoured Americana roots music to a totally new dimension. There is a strangely haunting complexity that threads throughout the entirety of the ten tracks. The intensity of which creates painful images of lurid happenings and desolate landscapes. All in all, it is a totally fascinating package of melodic songs ingrained with deeply dark lyrics but which are totally smothered in oodles of wonderfully arranged instrumental passages and amazing sound effects that incorporate twists and turns galore. In their entirety, the musical arrangements are extremely well-considered and, together with their accompanying austere lyrics, wholly create a weirdly hypnotic wall of sound. So much so, that just like a magnet the soulful progressions of the various scores happily draw you into what seems joyful bowels of acute desolation.

Such wonderful artistry from an instrumental perspective is amply matched with equal intenseness from a range of deeply moving male and female vocal contributions. In fact, it is vocal artistry to the extreme, conveying messages of both human vulnerability and stark desperation. Such yearnings are deployed with deft vocal projections and accompanied with subtle lyrical intentness.

‘A Line of Crows’ is a male and female duo comprising Robert-Averkios Antonsen and Gráinne Quick-Humphreys. Here gleaned from the bands face book page one learns, from a note by Gráinne, that whilst the compositional tasks were seemingly a joint effort, Robert carried out the labour-intensive studio work required for producing the music and creating the sounds and atmospheres. Gráinne further explains that she laid down most of her vocal tracks in Norway and some at her home in Ireland. Robert played all the instruments; guitars, bass, keyboards and in addition to writing and singing plus backing vocals on her tracks.

Summary: Despite the sombre lyrical subject matter this is a fascinating album combining a regal gathering of oddly styled country blues-tinged offerings. Such offerings extend to include a couple of ‘Bouzouki’ driven songs, clearly a curt nod towards Robert-Averkios’s Greek heritage (Goodness I hope I’m correct here but my living in Cyprus causes me to be pretty sure). The gruff male and more sweetly ingrained female vocals work really well together creating layers of beautiful harmonic superfluities.