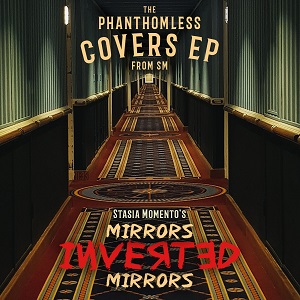 Creating a professional image in which to ply your musical histrionics is a commercially made judgement, often devised to place an act on a separate pedestal from the rest of the oppositional pack. Also a move, possibly carried out in order to attract a certain kind of audience or even utilised to follow a current trend. But listening to the new EP by ‘Stasia Momento’ I was, at first, somewhat flummoxed by the male vocal growling vocal mutilations leading the overall sound more towards that of horror-based art-rock genera. Such vocals initially seemed very weird and out of context to the instrumental side of the music, especially as the band are clearly a very talented bunch of musicians.

The thought occurred to me that the horror aspect, utilised by the band, might have something to do historically with their Vigo location in Galicia, and perhaps the regions Celtic background. Could, this, for example, be due to some past series of horrible happenings in their locality. Such happenings that could now be utilised within their stage act?. But apart from references to ‘Samhain’, the Gaelic feast of the end of harvest where residents, in the old part of town, will hang up pumpkins to make sure that the dead pass by on the night of October 31. I see no other possible connections.

So, there we have it, a decent group of musicians embarking along a path of dark musical intent accompanied and emphasised by a range of gruff lyrical embellishments. I needed to discover a reason why and according to their biography “The band utilise performers, actors & actresses to interact with the band on stage thus providing impact and elevating the theatrical atmosphere around their music”. Such a statement from their biography actually clarifies where the band might stand and the purpose of the growling vocals which seems to be in a kind of musical theatre direction.

Without a doubt, the musical structure of the five-track EP is actually pretty good with some interesting ideas. The female vocal accompaniment is especially attractive adding much atmosphere to the melodic direction of the songs. However, I have to be honest and say, that without the benefit of witnessing the band live, I absolutely detested the almost childlike male growling. Maybe, if this album submission for review had been presented as a live video, with the interactions of the actors mentioned earlier, a different viewpoint might have been reached.  But one has to make a judgement based on the submission of the album in WAV form only.

Growling vocal aspects apart there is plenty of energy generated in the percussive department of bass and drums. There is too a nice background wash of keyboards and bursts of powerful lead guitar. In one of the tracks, the music takes on a kind of nice folky aspect with a very well arranged Male / Female duet sung in the local Spanish/ Galician language. In fact, all the five songs are presented well and are melodic and memorable.

Summary: A pretty decent album in all respects especially from an instrumental aspect. The female support vocals are exceptionally good, the male vocals are mostly OK except when they are delivered in swathes of horrible groaning. Such groaning could easily put people off from buying the album, particularly if as mentioned by the record label, the EP is destined for worldwide release. It would be interesting to see what direction the band might take next as there is great value in their output and they could do well on the international scene.